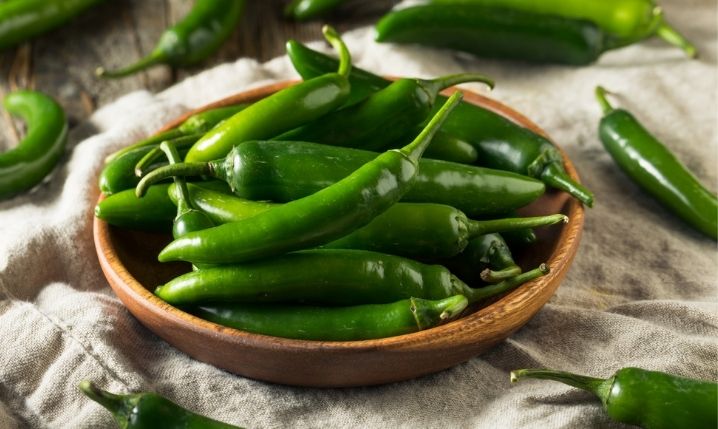 The serrano pepper is a chili pepper native to Mexico. It is used in Mexican and Italian cuisine for a variety of foods such as pico de gallo, salsa, and various relishes. In this article, you will learn what makes a good serrano pepper substitute and what will make the best alternative for you.

These peppers are one of the most highly consumed chili peppers in Mexico, however, they’re not always easy to find in certain parts of the US.

Read on to find out all about serrano peppers and what you should consider as substitutions in different situations.

What Are Serrano Peppers?

Serrano Peppers are a type of chili pepper native to the mountainous regions of Mexico. They appear green with a wax-like appearance when unripe, but their color can vary from this to red when ripe to mature.

Serrano peppers have a Scoville rating between 10,000 to 25,000 making these peppers notably hotter than Jalapeno, Anaheim, Poblano, or Cubanelle peppers.

You might find yourself wanting to use the serrano pepper in recipes for hot sauce, salsas, relish, sauces, or assorted garnishes.

The jalapeño pepper might be the best substitute for the serrano pepper for two reasons.

When it comes to bringing the heat? Jalapeños are not as spicy as serrano peppers, however, that’s not always the problem. They do have a distinct sweetness which means the flavor isn’t totally dissimilar to serrano peppers.

If you wanted to up the heat you could always use jalapeños for taste and texture while adding a couple of pinches of cayenne pepper, taste-testing as you go so it doesn’t overwhelm the dish.

If you want something hotter then cayenne pepper will definitely do that. It most often comes in the powdered form which means it might not be ideal for creating homemade salsas.

That being said you can use cayenne pepper as a replacement for serrano peppers in marinades and or similar recipes where you don’t need the whole chili.

Of all the peppers on this list, it is the Aleppo pepper that has the most similar heat level. These little peppers often come in the dried & crushed variety which means that you might want to use them selectively.

The Aleppo pepper has a distinct and unique sweetness that has been likened to tomatoes or raisins. These peppers are most commonly used as a seasoning in Middle Eastern cuisine.

Most people have crushed red peppers or ‘chili flakes’ at home in the spice rack which makes these an easily available substitute. They’re usually around the same heat level as serrano peppers, sometimes hotter. Sometimes they do have a little sweetness to them as many peppers do.

You can use crushed red peppers in place of serrano peppers for seasoning meat such as chicken, beef, and pork. You can also use them in soups, stews, and other slow-cooked recipes.

Poblano Peppers are another excellent substitution for serrano peppers in salsas and other foods where you want the whole chili.

They are not as hot, being milder on the Scoville scale. However, they do have some heat compared to some chilis out there.

One of the main benefits of these peppers is that they have a similar waxy skin that gives the same texture to dishes as you would get with serrano peppers.

Unfortunately, poblano peppers are not always easily available outside some of the States that border Mexico. They are usually widely available in California, New Mexico, and other nearby states. If you can get some then they do make an excellent substitute as well as an ingredient in their own right for dozens of interesting dishes!

No matter what reason you find yourself needing a serrano pepper substitute there are a lot of ideal options on this list that you can use to create delicious fiery salsas, soups, and similar. Just pick one of these options that you have available or that you can find in the store to pick up where you left off with your recipe!