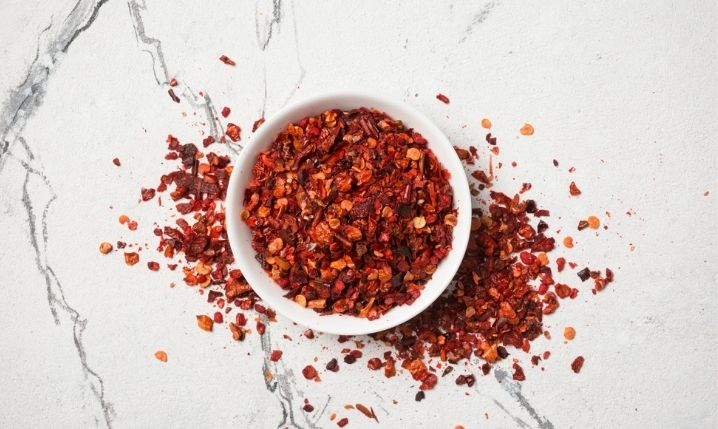 Red Pepper Flakes, also known as crushed red pepper, are used as condiments and spices in dozens of recipes commercially and at home. Sometimes, you might need a red pepper flakes substitute, which we will explore in this article.

Most often produced in China and Turkey, these flakes of pepper seeds and skins are popular, but there are things you need to know. For example, after around 18-24 months, the quality degrades, reducing the spiciness and heat. On the other hand, the fresher they are, the more spice they will add to your dish, which should be something you take into account when looking for a substitute.

So what else do you need to know, and what substitutions work in what scenario? Read on to find out.

What Are Red Pepper Flakes?

They are produced worldwide, but the actual chili peppers used vary, which means the heat level can also vary. Typical chilis used in red pepper flakes include cayenne pepper, jalapeños, serrano peppers, and anaheim peppers. Sometimes a combination of peppers is used to enhance flavor and spice simultaneously. In most cases, the heat level scores around 30,000 to 50,000 SHU on the Scoville heat scale.

You can use dried cayenne pepper as a 1:1 substitution in any recipe where you want a little more heat from your red pepper flakes.

Another store-bought alternative to red pepper flakes that you might have at home already is chipotle pepper flakes.

This alternative can still provide a lot of heat to your dish, but it can also have a robust earthiness and sweetness that works well in sauces.

The flakes are usually a little larger, which can affect the texture of some foods, such as sausages, so in most cases, you should use them in sauces where they can be broken down a little during the cooking process.

You can use chipotle chili flakes as a 1:1 substitute for red pepper flakes in any dish.

The powdered form of the small and vivid chili de Arbol pepper, this substitution makes an excellent alternative to chili flakes in curries, salsas, and pizza sauces where the heat is meant to complement other flavors.

They have a slightly nutty flavor with a distinct smokiness that makes them less sweet than red chili flakes, but this doesn’t matter when combined in dishes using tomato or other sweetness-enhancing ingredients.

The heat level is between 15,000 to 30,000 units on the Scoville scale, making them milder than red chili flakes, but that can be perfect if you don’t want too much spice.

The Serrano pepper is often used in red pepper flakes, although they aren’t as commonly used as cayenne peppers.

They work exceptionally well for relishes, marinades, salsas, and in some cases, curries. If you’re using fresh serrano peppers, they have a more waxy skin which means they’re not going to give the same texture as chili flakes, which means they aren’t ideal as a general condiment.

If you have dried serrano peppers, they can make a unique substitution for red pepper flakes because of their texture and piquant flavor.

Serrano peppers have a SHU rating between 10,000-25,000 which means they are not as spicy as cayenne pepper-based red pepper flakes. So it might be that you do want something hotter. However, you might find them a perfect substitute for red pepper flakes in pasta dishes where it’s not as common to go for intense heat!

It’s possible to find chili paste in the store, but you might also have some at home in the refrigerator.

The heat level with chili paste can vary from very hot to relatively mild. So always keep that in mind when considering the quantity you’re going to use.

You can substitute chili paste for red pepper flakes in pizza sauces, dips, marinades, and salsas.

Hungarian Paprika makes one of the best substitutes if you want a non-spicy alternative to red pepper flakes. With a distinct sweetness, paprika can work well in sausages and other meats as either an ingredient or a rub.

In a real pinch, you can use chili powder instead of pepper flakes in sauces, curries, and similar dishes where you only want the heat.

Most powdered forms of chili are highly concentrated, making them very hot when you use too much. So it’s better to add chili powder slowly while testing for taste as you go.

It’s worth mentioning that chili powder will permeate the entire dish, which isn’t always the case with flakes. So chili powder isn’t a good option for use as a condiment or topping.

If you have some dried chilis at home, you can easily make red pepper flakes for use in your recipe and future recipes! You’ll only need a blender or spare pepper mill.

This method isn’t always the most convenient option, but it can provide the best 1:1 substitute when using some of the chilis that we mentioned before.

Any of the options above will work as a red pepper flake substitute in almost any recipe you need them in. Pick an alternative that sounds like the best substitution for your dish, and you’ll be surprised how well it works!