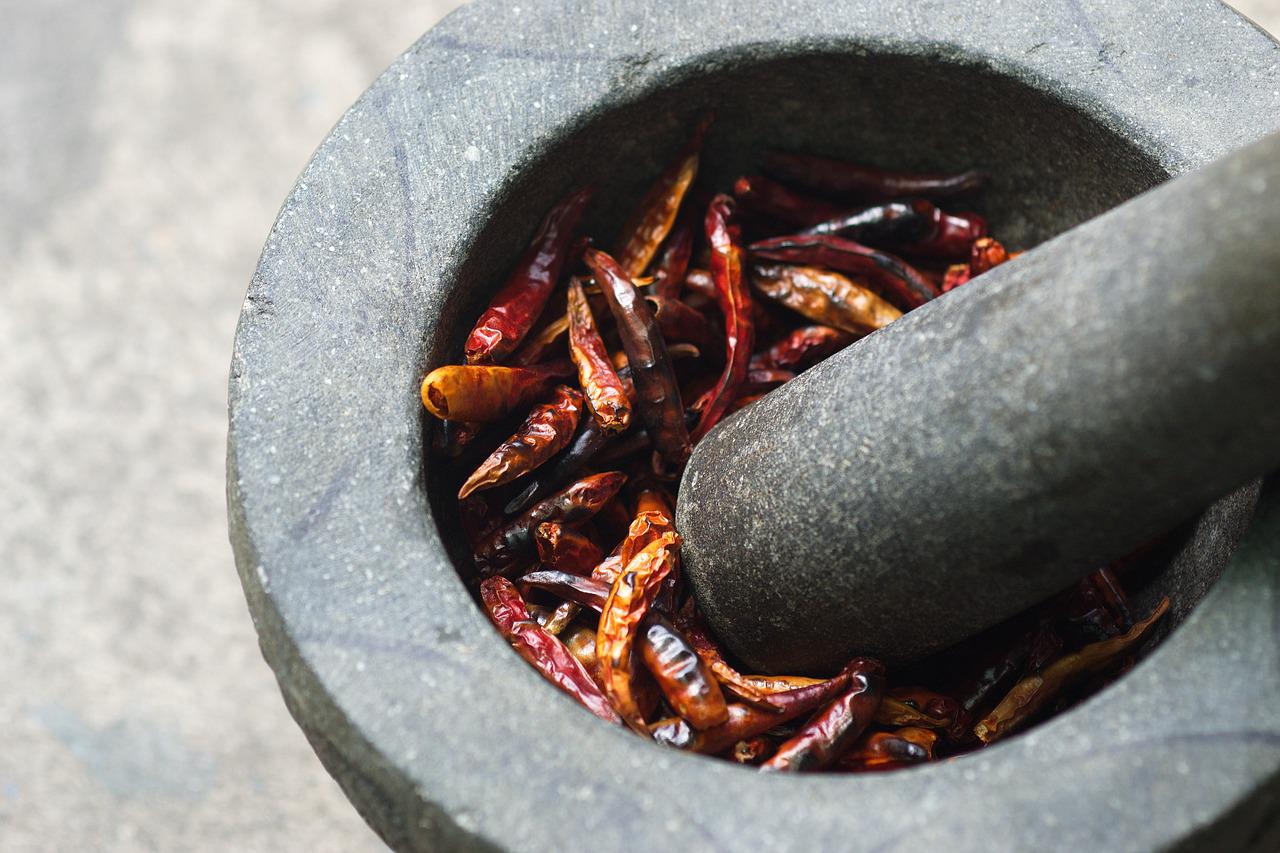 Cayenne pepper is a popular chili pepper that originated in Cayenne, French Guiana. They also grow in tropical areas like Mexico, East Africa, India, etc. Long and tapered, these peppers grow to a length of 4 to 10 inches. They’re typically slender with a curved tip. And you’ll most likely come across them as red-colored, although they can be found in other colors like yellow and purple.

With a 30,000 to 50,000 SHU rating on the Scoville scale, Cayenne pepper adds spiciness and flavor to different dishes. They’re considered relatively hot chili peppers, and they sure do pack a punch.

They could be used fresh or in a dried, ground form. However, the ground form may include other spices or a blend of different chili peppers. These peppers are featured in different dishes worldwide, including stews, curries, hot sauces, casseroles, etc.

While they do a great job flavoring your recipes with spicy and earthy flavors, Cayenne pepper has impressive health benefits. They contain a capsaicin compound that helps with pain relief, digestive health, metabolism, etc. They are packed with antioxidants, like vitamins A, C, E, K, and B, and minerals like potassium, iron, copper, etc.

But what happens when you run out of Cayenne pepper and want that spicy kick in your recipe? Here are 7 substitutes that will bring the heat and ensure your meal tastes terrific.

The jalapeño pepper is a green chili pepper typically used in Mexican-style cooking. This moderately hot pepper is an excellent substitute for Cayenne pepper.

They are typically used unripe and green, although they turn red, orange, or yellow when ripe. A jalapeño pepper has firm flesh and averages about 2 to 4 inches in length.

This pepper rates about 4,000 to 8,500 units on the Scoville scale, so it’s less spicy than Cayenne pepper. With their mild spice comes a distinct aroma with hints of smokiness. Because they have less spiciness than Cayenne pepper, you can substitute it in a 1:1 or 2:1 ratio.

Aji Amarillo has its origins in Peru and is also grown in some regions in South America. They are a huge part of Peruvian and Bolivian cuisine.

These peppers have a rating of 30,000 to 50,000 units on the Scoville Heat Scale, similar to the Cayenne pepper. Although the name implies that the pepper is yellow, the mature pods are orange and turn yellow when cooked.

These yellow peppers can be made into a paste or used crushed or whole in soups, sauces, etc. They are incredibly aromatic and add great flavor to your meals. With a similar heat level, you can use it as a substitute for Cayenne pepper in equal amounts.

Black pepper, also known as peppercorn, is native to India. It’s referred to as the world’s most traded spice. And this pepper is quite different from other known peppers. Black peppers are actually a drupe (a stone fruit).

And the spiciness comes from a different compound called piperine instead of the capsaicin found in chili peppers. It’s a great seasoning and is a fantastic Cayenne pepper substitute.

The root of the ginger plant is a spice. And it has been used for thousands of years in both cooking and medicine. While ginger is not a chili pepper, it can work well as a substitute for Cayenne pepper. It’s an excellent food flavoring with its sweet and slightly peppery aroma.

Paprika is a spice made from chili peppers. The peppers used are milder and thinner, allowing for easy drying and grinding.

Originally from Hungary, paprika is now used in different cuisines worldwide. They are also a healthy substitute as they contain antioxidants like lutein and zeaxanthin and vitamins.

This spice can be found packaged in grocery stores. Its spiciness varies from mild to hot, and it’s an excellent Cayenne pepper substitute.

Paprika has a smoky flavor that adds a new dimension to the meal. And the powder is made from a blend of different chili peppers making for an interesting flavor profile.

The heat is similar to Cayenne pepper’s, making it the perfect substitute. It’s great in sauces, soup, and even as a marinade. And it’s readily available in the spices aisle at your local store.

Gochugaru is a Korean chili powder and is popular in Korean cuisine. It’s a vibrant red and has mild to moderate heat levels.

Although the taste of Gochugaru is different from Cayenne pepper, it has a subtle sweetness to it with a hint of smokiness. This chili powder rates between 5,000 and 8,000 on the Scoville scale, so it’s milder than Cayenne pepper.

Cayenne pepper is an excellent chili with explosive flavors and spiciness. But when you run out of this ingredient, you can refer to this list of 7 fantastic Cayenne pepper substitutes. Any one of these will produce the spicy flavors you need to make your dish a success.