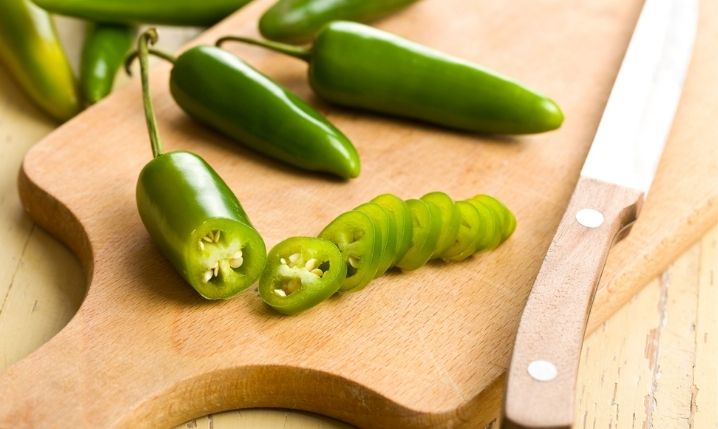 Jalapeño Peppers are the most popular chili pepper in the world. They are often used for salsas, fajitas, tacos, and more. In this article, we’ll be exploring some of the best alternatives you can use as a jalapeño substitute.

Jalapeños are medium-sized chili peppers that originated in Mexico. There are many varieties, including the chipotle pepper, which are, in fact, smoked and dried jalapeño peppers.

If you’re looking for the ideal substitution for the famous jalapeño chili pepper, read on to find out all the options for any situation or dish.

Jalapeños are chili peppers originating in Mexico. These delicious chilis have become one of the most popular in the world for their distinctive flavor and versatility.

They are medium-sized, with most jalapeños appearing green as they are usually picked and packaged when they are less mature.

Jalapeños have a SHU rating of 2,500-10,000 Scoville units, making them warm but not too spicy compared to many peppers.

They are often eaten whole as appetizers. However, you can also use them for salsa, pickling, soup, pico de gallo, and much more.

So versatile and incredible in any dish, like the rest of us, you probably love jalapeños for their distinct subtle sweetness and a little heat.

You can use serrano peppers in place of the jalapeño when you’re looking for something that will match the taste profile, and that also looks very similar.

These peppers have a bright, grassy flavor that works well in so many dishes like fajitas and as an essential ingredient for sauces, salsas, and more.

However, these peppers are much hotter than jalapeños, so they’re not ideal for eating whole as appetizers or for use in similar situations. With a Scoville heat rating of between 10,000-25,000 units, these can either be a dream substitute or something you’d prefer to avoid.

The texture is slightly different, too, with jalapenos having thicker, chewy external skins or walls than the serrano pepper. So, again, it’s a slight difference, but it might be worth noting.

Fresno Peppers are medium-sized peppers with a bright bite and slightly grassy taste when green. They are less mature when green, which is how they should be substituted for the jalapeño pepper.

However, these peppers become more robust and fruity when ripe and mature (red), which does not make for such an excellent alternative as the flavors can be too far apart to work.

Fresno peppers are between 2,500-10,000 SHU, which is identical to the Jalapeno on the Scoville heat scale. So they do make an ideal substitute when you’re looking to match the heat level.

You can use them in stuffing recipes, enchiladas, and other Mexican cuisines.

Cubanelle Peppers are notably sweet peppers, used widely in Caribbean cuisine with a bright flavor that doesn’t taste too different from Jalapenos in the right dish.

These peppers are incredibly mild; cubanelle peppers only have a SHU rating of 100-1,000 units on the Scoville heat scale. This fact can be less than ideal, but it doesn’t matter if the subtle heat of the jalapeño isn’t a signature part of the dish.

One of the other main drawbacks of the cubanelle pepper is availability. They’re not always the easiest to find in the store. However, they make an excellent 1:1 replacement for jalapeño peppers to fill the space in any dish if you find them or have them available.

Chipotle Peppers are excellent in a couple of situations. You can most easily purchase them as coarsely ground flakes for use in specific dishes.

And you might already know that chipotle peppers are, in fact, mature, smoked jalapeño peppers. However, the flavor isn’t quite the same…

The smokier chipotle has a more earthy flavor that is better in barbecuing and other dishes involving meat, which isn’t what you would always use jalapenos for in the first place.

However, if you’re feeling adventurous, you can use these peppers in hot sauces, soups, and similar dishes – while understanding it won’t taste quite the same.

Anaheim Peppers make an excellent alternative when you can’t handle the heat. While jalapeño peppers aren’t too spicy, the Anaheim pepper is milder, with a SHU rating of only 2,500-10,000 units on the Scoville heat scale.

Ideal for salsas, dips, sweet hot sauces, and stuffing (these peppers are large), you can use Anaheim peppers in place of jalapeños in various situations and dishes.

Whether you need a jalapeno substitute for pico de gallo, stuffing with cheese, hot sauce, or something else, there are plenty of excellent options in the rich and diverse world of chili peppers.