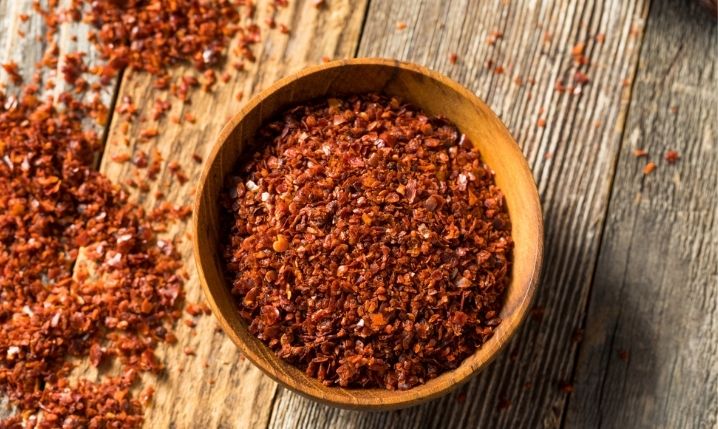 The Aleppo pepper, also known as the Halaby pepper, is a chili pepper native to Syria. It is predominantly grown in Syria and Turkey. If you are looking for an Aleppo pepper substitute then there are a number of suitable alternatives.

It is used in Middle Eastern and Mediterranean cuisine, often in the form of crushed flakes. It has a mild heat level with a slight sweetness that has been described as fruity.

In this article, we’ll explore all the options when it comes to what makes an ideal substitution for Aleppo peppers and when.

What Are Aleppo Peppers?

Aleppo Peppers are so named after Aleppo, Syria. Mostly grown in the Middle Eastern countries of Turkey and Syria these peppers are mild with fruitiness, and cumin-like undertones.

Aleppo Peppers are most often crushed and used as a condiment to season salads, meat, beans, and other foods. They are also used to make dips and occasionally as an ingredient in sauces.

They are often used as substitutes for crushed red pepper or paprika because of adding similar ‘brightness’ to a dish.

Aleppo Peppers have a Scoville rating between 10,000-25,000 making them a mild-moderate heat pepper, similar to Serrano Peppers, but hotter than the more common Jalapeño.

You can find a number of ideal substitutions below that match flavor, reduce the spice, or even up the heat. There’s an option for every situation when it comes to peppers and the Aleppo pepper is no different in that you’ll have no issue finding an alternative that works.

Also known as red pepper flakes, you can use crushed red peppers in place of Aleppo peppers as a seasoning for meats and cooked bean recipes.

Crushed Red Peppers have a Scoville rating of between 15,000-30,000 units which makes the heat similar to what you would get with an Aleppo pepper.

They also have a little sweetness, and in fact, Aleppo peppers are sometimes used as a substitute for crushed red peppers.

You might want to avoid using these in salads because the dried pepper seeds tend to be hard and chewy.

One excellent option is to use sweet paprika combined with cayenne pepper. This allows you to have the sweetness that you’d expect from Aleppo peppers, but you add a little heat by moderately using cayenne pepper.

The ratio is as simple as this:

This should give you enough to season meat or mix in with some delicious Middle-Eastern-inspired beans. You can always make more or use a little less where required!

This substitute takes a little more time, it also won’t work for salads, so it’s not necessarily the best option in all cases.

The serrano pepper has a Scoville rating between 10,000-25,000 which puts them in the same heat category as the Aleppo pepper.

This alternative works well in situations where you want to mix in some whole chilies, so salads, curries, and sometimes sauces or soups.

Serrano Peppers do not have quite the same tomatoey-raisin-like flavor that Aleppo peppers are so often noted for having, but they do have a bright flavor that can work as a substitution in many cases.

The fleshiness of the skin on serrano peppers makes them ideal for salsas, curries, and sauces.

Cayenne Pepper can be used either in the whole form or the powdered form that you might have in the spice rack.

You can use cayenne pepper as an alternative to Aleppo peppers for seasoning meat or spicing up bean dishes, sauces, and similar.

However, cayenne pepper is a lot hotter on the Scoville scale with a rating between 25,000 to 50,000 units. This works well if you’d like a replacement that adds more spice to your recipe but it should be considered when you don’t want something too hot.

Cubanelle Peppers are a mild and sweet pepper that makes a fantastic alternative if you want something less spicy than Aleppo peppers.

They most often come in their whole form and can be used instead of Aleppo peppers for salads, stocks, and curries. The taste isn’t identical but they do add a sweetness that transfers well to most dishes.

The Scoville rating for cubanelle peppers is around 100 to 1,000 meaning that if you want something with some heat another option might be a better idea.

Whether you’re all out or you need an Aleppo pepper substitute for another reason there are some excellent alternatives on this list that work for any situation. If you’re looking for something that tastes similar you can go with red pepper flakes or paprika, or you can choose one of the other options for something spicier or with a little less heat.