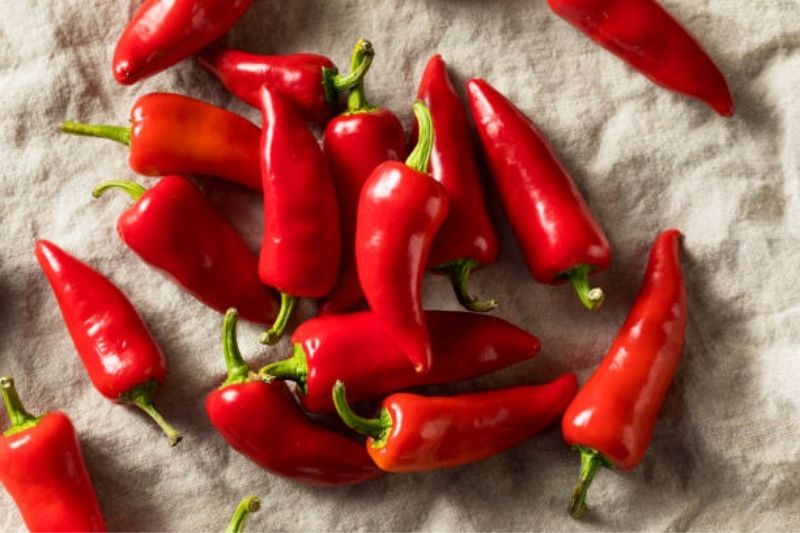 The Fresno pepper is a medium-sized Mexican chili pepper and is often confused with Jalapeños. They’re not as widely available, so sometimes you might require a substitute. Read on to find out the best substitutes for the Fresno pepper.

What Are Fresno Peppers?

There are two types of Fresno peppers depending on their maturity: The green immature Fresno peppers and the mature red Fresno peppers. The green peppers are mild in heat but are packed with flavor. They are very versatile and can be used to make sauces, soups, dips, casseroles, etc. The red peppers can also be used as a garnish for Mexican cuisine.

Mature red Fresno peppers don’t have as much flavor as their green counterparts but are definitely spicy. They are packed with heat and are used to make salsas, marinades, etc. Fresno chili peppers are a great source of vitamins and minerals like vitamins C and B, niacin, thiamine, and riboflavin.

This pepper has thin walls, mild heat, and matures fast. They are frequently used to make salsas and are often incorporated to add heat and flavor to recipes.

They are low in calories and fat and help reduce cholesterol. There are significant amounts of minerals like potassium, manganese, magnesium, and iron, with higher amounts found in the red mature Fresno pepper.

Jalapeños are one of the popular hot chili peppers in America. Although it’s originally from Mexico and a staple in their cuisine, it has become a part of American cuisine.

The flesh is smooth and firm and has a pungent taste. Typically used when green, this Mexican chili packs a punch in heat, with the intensity varying from mild to spicy hot. As such, Jalapeño peppers are an excellent substitute for Fresno peppers.

Apart from bringing flavor and heat to your meal, the Jalapeño pepper is filled with vitamins like C, B6, E, and K, and some minerals like calcium, iron, potassium, phosphorus, etc. They are easy to get your hands on. And can be found fresh from the farmers’ market, canned, or pickled in the aisles of grocery stores.

Holland chili, also known as the Dutch Chili, was cultivated from one of the Cayenne pepper varieties from Indonesia. They typically grow up to 5 or 6 inches long with a tapered tip and come in various red, yellow, and green colors. While they have a milder heat level than Fresno peppers, they are a perfect substitute for them.

The mild to moderate heat of the Holland chili makes it great for use in salads, soups, baked dishes, or roasts. They also add a sweet and fruity flavor to your cooking, making it a go-to chili pepper. Holland peppers are available all year long, so they should be relatively easy to find.

Chipotle peppers are popular in Mexican and Tex-Mex cooking. While the other listed peppers are fresh peppers, this substitute is, essentially, an upgraded Jalapeño pepper. Chipotle peppers are made from ripe Jalapeño chilis that have been smoked and then dried. You could leave them whole or grind them into flakes or powder.

The making of Chipotle peppers started as a way to preserve the bumper harvest of Jalapeño crops. But it has since evolved into a staple ingredient, and the heat is phenomenal.

Chipotle peppers have a rich smoky and spicy flavor making them a great additive to meat marinade. They can also be used to make a dipping sauce and added to various dishes, especially in Mexican and Tex-Mex cuisines.

Serrano peppers got their name by referencing the mountains (sierras) of the regions it originates from. It’s small and typically grows to a length of 1 to 4 inches. They are hard and dry with thick walls and are considered a meaty pepper.

Although they come in various colors, you are more likely to find them green. They are far hotter than Fresno peppers, so be sure to use less when substituting. Because of the heat, they pack, Serrano peppers are used to make sauces, salsa, and even hot sauces.

Serrano peppers make an excellent substitute for Fresno pepper with their fresh spiciness and flavor. They could be roasted, pan-cooked, or used fresh in your recipes, and they are commonly found in the produce section of grocery stores.

Habanero peppers are arguably one of the hottest varieties of chili peppers. With a 100,000 to 350,000 SHU rating on the Scoville scale, this Amazonian chili is more than ten times hotter than Fresco peppers.

It is a popular ingredient in extra spicy food and hot sauces, given this heat intensity. If you’re looking for a hotter substitute for Fresno peppers, the Habanero pepper is your “man”.

The heat is out of this world, but it has a floral aroma and flavor to die for. With the spiciness comes a citrusy flavor with hints of smokiness.

It can be found on the shelves of most grocery stores. But make sure to use gloves when handling this spicy hot pepper to prevent painful chili burns.

Thai Luang peppers come in various colors like pink, yellow,  orange, and, most commonly, red. They are very spicy and an excellent substitute for Fresno peppers. This pepper embodies earthy and fruity flavors alongside spice that elevates your dish. Thai Luang peppers are rated at 50,000  to 100,000 SHU on the Scoville scale, making them hotter than Fresno peppers.

Fresno peppers are a mild variety of peppers originating in Mexico. They get hotter as they ripen and pack a punch in spiciness and flavor. Fresno peppers feature a great deal in Mexican cuisine. And when you don’t have Fresno peppers on hand, these 6 excellent substitutes can be used to complete your recipe.