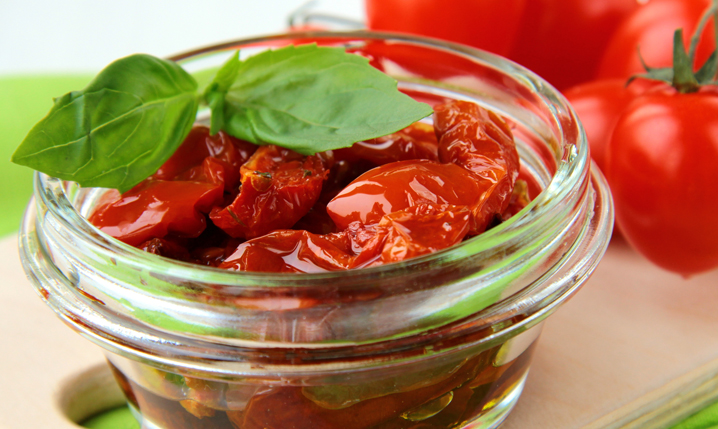 Sun-dried tomatoes are ripened tomatoes that have been dehydrated through spending time drying in natural sunlight. If you require a sun-dried tomato substitute, some excellent alternatives are available for any situation.

You can sun dry tomatoes by placing each tomato in the sun for a few days to a week and a half. Each tomato is usually pre-treated with salt or sulfur dioxide before being sun-dried to improve the vividness of the final color and appearance of the tomatoes.

In this article, you can find out what substitutions you can use for sun-dried tomatoes in any recipe or situation.

What Are Sun-Dried Tomatoes?

They have an incredibly concentrated flavor that is best described as sweet and tart. Sun-dried tomatoes are commercially preserved in olive oil or sunflower oil, sometimes with additional herbs and spices.

The texture of sun-dried tomatoes is also distinct, with the skins becoming both chewy and soft, which can help elevate a lot of recipes. It’s important to keep this in mind whenever you’re looking for a suitable substitute.

You can enjoy these tomatoes in several ways while knowing they’re genuinely healthy, not only tasty. Sun-dried tomatoes are naturally high in Vitamin C, Vitamin A, Magnesium, and Iron.

Check out some of these sun-dried tomato alternatives that we have selected for taste similarity, convenience, texture, and consistency.

Cherry Tomatoes are an excellent alternative for sun-dried tomatoes when you want something to serve as an appetizer alongside meats, cheeses, and similar. Essentially, they work great in an antipasto platter!

However, you can also use cherry tomatoes in salads. They have a lot of sweet flavors that can almost be so sweet that it’s tart. The skins are also similar in texture, a little chewy.

Sometimes sun-dried tomatoes are made with cherry tomatoes. So that’s another thing to keep in mind when considering overall flavors to compliment your dish.

You can use fresh tomatoes in place of sun-dried for almost any dish. However, it might be best to use them in salads in this case. There are many different tomato varieties out there, but the best tomatoes to use in this case would be grape tomatoes, cherry tomatoes, and regular salad tomatoes.

You can also dice fresh tomatoes into smaller segments, add some salt and olive oil, and serve them right with tasty pasta dishes.

They make an acceptable substitute in certain situations because they will still taste delicious, but remember to add any additional ingredients you might want, such as salt, garlic, or olive oil.

You can roast some bell peppers in the oven or on the grill at a low heat to dehydrate them and create a nice chewiness to the skin that isn’t too dissimilar to sun-dried tomatoes.

These make a good alternative for sun-dried tomatoes in antipasto and similar dishes.

Of course, you can always sprinkle them with a bit of salt and olive oil to give them an extra pop in the flavor department.

If you’re not in a rush, you can always produce some homemade sun-dried tomatoes.

There are two options for this approach; one way is to go authentic, which you can follow in the video below.

The other option is quicker, not authentic, but is very effective. You can dehydrate some cherry tomatoes in the oven to create a similar result to use in any dish.

The oven method might not be the best idea, but it can work well for many dishes, including salads. You can use other varieties of tomato, but cherry often works best.

You can find some excellent sun-dried tomato substitute ideas in the above list. Regardless of why you need an alternative, there’s something for you that will work in any dish or recipe.