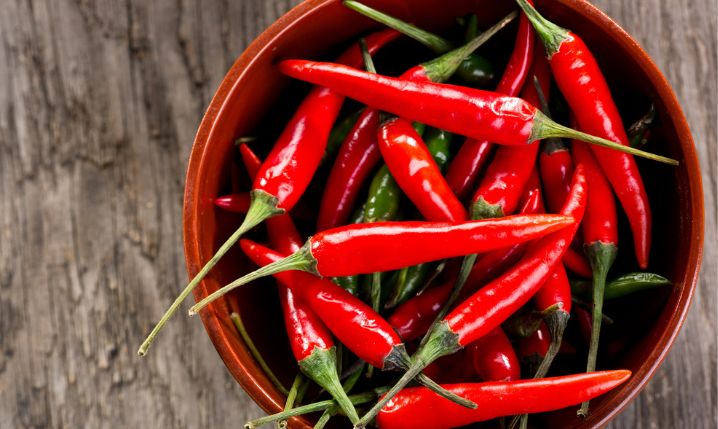 Red Chili Peppers originate from Central and South America, where they have been cultivated for centuries. And they add a fair amount of heat to the dishes they’re used in. However, if these peppers are in short supply, you should read on to find an alternative.

What are Red Chili Peppers?

Red chili peppers are a member of the nightshade family of vegetables and are native to the Americas. They were first domesticated in Mexico and remain a staple in Latin American cuisine.

This chili pepper is commonly used in spicy dishes. And it can range in heat from mild to extremely hot. In fact, they typically have a Scoville rating of 2,500 to 8,000 SHU.

They are used both fresh and dried in dishes such as enchiladas, tacos, and mole sauce. Red chili peppers can also be pickled and are often used to make hot sauce or chili jam.

If you’ve cooked with red chili peppers, you know they can pack a punch. But what if you don’t want your meal that spicy or can’t find any at your local store? Luckily, you can use a few different ingredients as a substitute for red chili peppers.

The Serrano pepper is named after the mountain ridges (Sierra) in Mexico, where they are grown. They’re usually green when harvested but can also be red, orange, or yellow.

When substituting Serrano peppers for red chili peppers, you should taste the dish when adding peppers to regulate the heat. Dishes suited to Serrano peppers include salsa, guacamole, and bean chili.

Native to South America, the Cayenne Pepper has a similar flavor to red chili peppers, but they are typically hotter.

As such, when substituting cayenne peppers for red chili peppers, it is essential to start with a small amount. Then increase the amount of cayenne pepper used gradually until the desired spice level is achieved.

Some typical dishes that use cayenne peppers include buffalo chicken wings, hot sauce, and salsa. You’ll also find that cayenne peppers are generally easier to find in grocery stores.

Named after the city of Jalapa in Mexico, jalapeño peppers are an ideal substitute for red chili peppers. However, jalapeño peppers are not as spicy, so they may not be suitable for dishes that are intended to be hot. Dishes such as enchiladas, tacos, pizzas, pasta, and stews are good choices.

Jalapeño peppers are also low in sodium, cholesterol, fat, and calories. Which makes them a relatively healthy option. And they’re more widely available than red chili peppers, as they’re produced in most countries.

These dark Mexican peppers are produced when poblano peppers are left on the vine to ripen. They’re then harvested and dried to produce a deep red, sometimes burgundy-colored chili pepper.

The best dishes for dried poblano peppers are those that don’t rely heavily on the spice of the pepper for flavor.