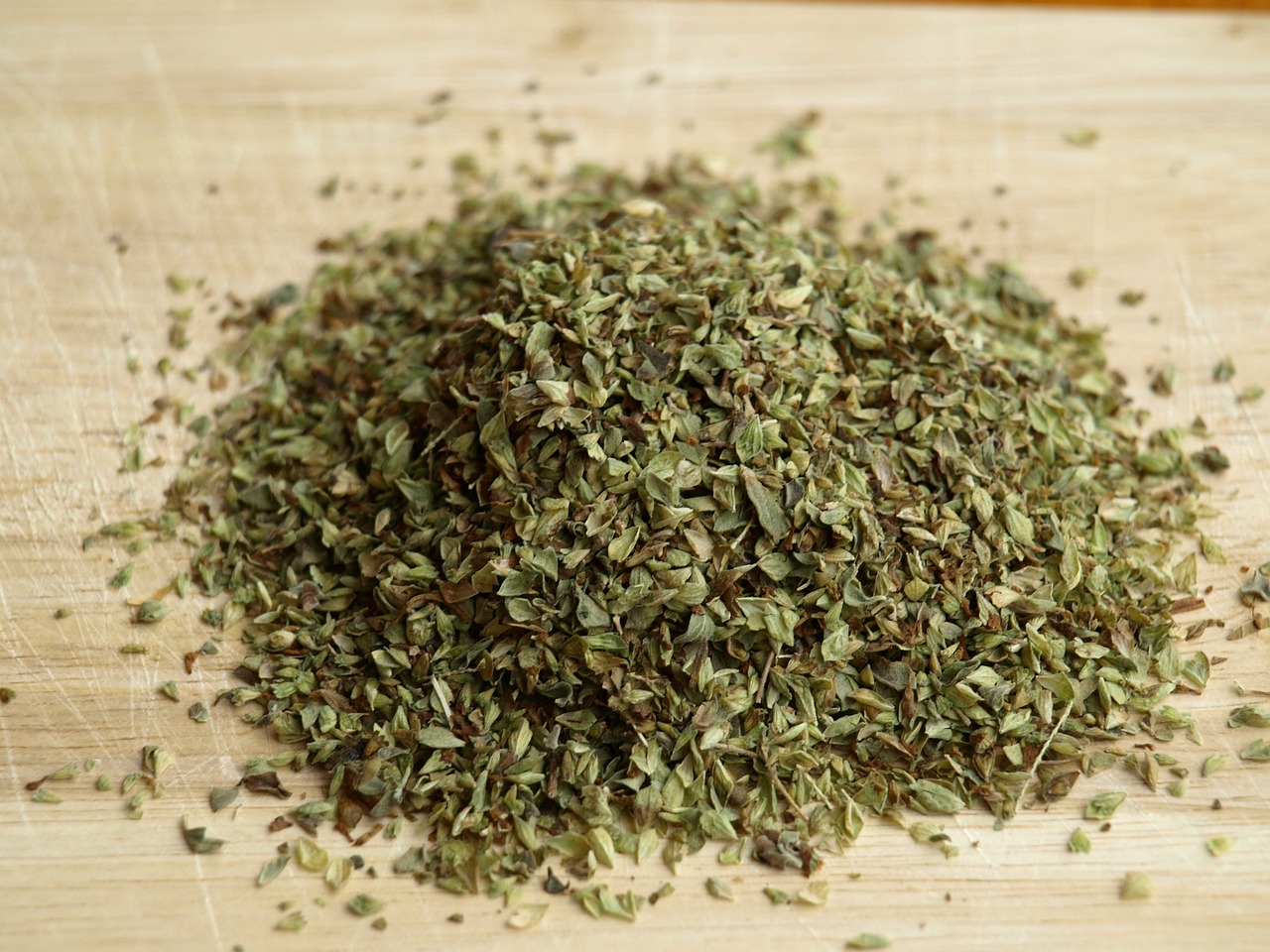 If you add oregano to any dish, you will experience earthy undertones with hints of bitterness. While incredibly versatile, having an oregano substitute on hand is always a good idea.

This herb, also known as Origanum vulgare, is linked to the mint (Lamiaceae) family. And it is typically grown in parts of the Mediterranean and Asia.

But suppose you are not an oregano fan. In that case, there are plenty of potential alternatives you probably already have in your cupboard.

Oregano is an aromatic herb made from the leaves of the oregano plant. It has rich citrusy and mint notes. And the flavor is often described as being somewhat bitter.

It’s commonly used in Italian dishes, but you’ll also find it in many other Mediterranean dishes. But it’s most often used on pizzas and in pasta dishes.

Oregano is also used often used in chili recipes and seafood dishes. And this flavorful herb shines when incorporated into tomato-based dishes and pairs well with beans.

When finding alternatives for oregano, you must consider the type of dish you’re making. Think about the flavors and textures of the dish before including an oregano alternative in your recipe. These substitutes may offer slightly different flavors, so it boils down to what you’re preparing.

Basil is another herb that’s part of the mint family. It’s native to Southeast Asia and commonly used in Italian and Thai cuisines. And it has a mild, sweet, and peppery flavor with hints of anise. On the other hand, oregano has a touch of bitterness and a deep minty flavor.

Commonly used as flavorful pizza toppings, basil is the star ingredient in traditional pesto. And you can also use it as a seasoning in tomato-based dishes.

To replace oregano with basil, start with a 1:1 ratio. And as is the case with all herbs, replace dried basil with dried oregano.

Thyme is a fantastic substitute in slow-cooked dishes like stews and soups because it adds more flavor as it cooks. You can also sauté thyme with onion and garlic as a base for pasta sauces or fillings for pasta bakes.

However, dried thyme has a distinct grassy flavor with a scent similar to lavender and rosemary. In comparison, oregano has a peppery taste and a scent similar to mint. If a recipe calls for oregano, replace it with thyme at a 1:1 ratio.

This leafy herb is a member of the Apiaceae family and comes in two varieties: curly and flat. Both have a mild peppery flavor with bitterness similar to oregano. However, unlike oregano, it lacks minty freshness.

Parsley works exceptionally well in tomato sauces and with roasted vegetables. You can also add it fresh to your salad for a splash of color.

While it lacks oregano’s robust minty flavor, you can use it as a substitute in equal parts. Just be sure to add in the earlier stages of the cooking process for the flavors to marinate.

A fascinating oregano substitute is tarragon. It delivers a subdued bittersweet flavor packed with an earthiness similar to oregano.

However, it comprises an anise scent with licorice flavors. It also has a darker green color than oregano with a glossy feel. Unfortunately, it doesn’t work well in dishes with a long cooking time because it’s delicate.

That said, using it to add a powerful kick to stews and tomato soups is a great option. And it’s a winner in fish and chicken dishes. To use tarragon as an oregano replacement, take the fresh leaves and chop them finely. Use ½ teaspoon of tarragon for every teaspoon of oregano.

Like oregano, marjoram comes from the mint (Lamiaceae) family of plants. However, it’s sweeter with a slightly mild flavor and hints of citrusy and woody undertones.

You can replace oregano with marjoram in soups, stews curries, savory bakes, and more. But remember that it won’t retain its flavor for a long time.

In addition, it may impart a floral scent to your dish instead of the sharp minty fragrance of oregano. In your recipe, you can substitute 2/3 of a teaspoon of dried oregano with one teaspoon of marjoram.

Italian seasoning is a mixture of dried herbs such as rosemary, oregano, and thyme. Occasionally, you’ll also find parsley and basil included.

It has a delicate earthy, peppery flavor with undertones of sweetness. One caveat is that Italian seasoning has several herbs, each adding a distinct flavor to your dish. However, the combination of flavors makes it ideal for pasta, rice, meat, vegetables, and so much more.

Because it’s more flavorful than oregano, use half the amount of the Italian seasoning to replace oregano in your recipe.

Believe it or not, dill makes a good oregano substitute. Dill is a delectable feathery herb from the dill plant (Anethum graveolens). It has a subtle sweetness with grassy notes, especially freshly picked.

Because of its unique flavor, dill makes a fantastic compliment to seafood dishes and pickles. Unfortunately, the longer it cooks, the less flavorful it becomes. Therefore, adding it at the end of the cooking process is best for a richer flavor.

You can replace oregano with dill in equal parts in your recipe or add more as needed. Just be sure to use dried dill when replacing dried oregano to mimic the flavors.

Rosemary makes an excellent substitute because it has similar minty and earthy notes. It also comes from the mint (Lamiaceae) family.

Although rosemary is more aromatic than oregano, it delivers a terrific citrusy taste to your food. It pairs exceptionally well with chicken, turkey, lamb, and roast vegetable dishes. Just remember to use it cautiously because it is pretty potent.

Oregano is used in various dishes. Its distinct flavor and lovely aroma can significantly enhance any meal. But what can you do if you’ve been planning a meal with oregano and realize you’ve run out? Any oregano substitute mentioned above is sure to be a winner.