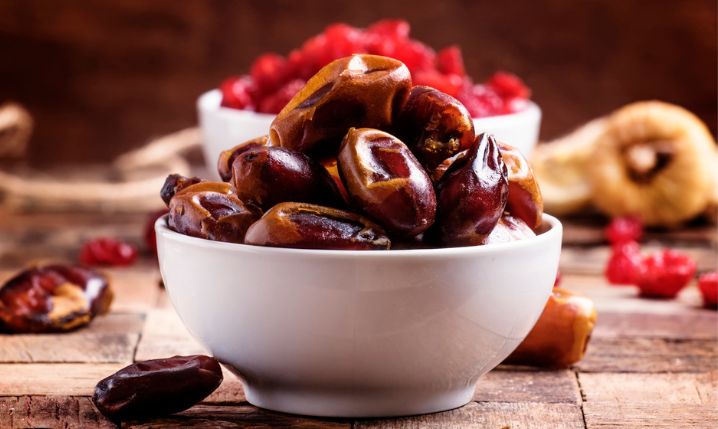 Digging into a warm sticky toffee pudding must be one of the most blissful experiences on earth. This ultimate comfort dessert originated in the United Kingdom and contains dates. But if you need a substitute for dates in sticky toffee pudding, there are a few options you could try.

Sticky toffee pudding comprises a soft and moist sponge cake drenched in a treacle and toffee sauce. And dates are a vital ingredient, either puréed or finely chopped before being added to the cake batter. The result is a warm, sweet, toffee-soaked slice of heaven.

This article will investigate the various options available when looking for a replacement for dates in sticky toffee pudding.

About Dates & Their Use in Sticky Toffee Pudding

While sticky toffee pudding was first introduced in the United Kingdom, dates are predominantly harvested from date palms in the Middle East. The date is a type of fruit that’s incredibly sweet and reminiscent of chewy toffee.

The traditional sticky toffee pudding recipe calls for the dates to be soaked in warm water and puréed. However, most modern recipes require the dates to be chopped finely before adding them to the batter.

Dates are regularly incorporated into puddings and desserts. And they’re commonly used to make date syrup, an alternative to maple syrup.

There are numerous date varieties, many of which are readily available at most grocery stores. However, the Medjool date is the most common date for sticky toffee pudding.

Dates are indeed integral to a traditional sticky toffee pudding recipe. But there’s no need to panic if you don’t have dates on hand because several alternatives are available. They may not produce the original taste, but they’ll still make for a delicious pudding.

Raisins are dried grapes, typically made using large, plump, and seedless grape varieties. And they’re an excellent substitute for dates in sticky toffee pudding if you add the raisins to the batter as is.

Using raisins as a replacement for dates will offer a similar chewy texture. However, they won’t bring as much sweetness to the pudding as dates. That said, raisins are sweet enough to produce a delicious, sticky toffee pudding variant.

You won’t need to adjust quantities when using raisins as a substitute. Although, you are welcome to use fewer raisins if you prefer.

Like raisins, sultanas are produced by drying large seedless grapes. However, they are treated with an oil-based liquid to speed up the drying process. Therefore, they are lighter in color than raisins due to the shorter drying period.

Sultanas are usually sweeter and smaller than raisins. However, they will still not provide a level of richness on par with dates. However, they’re just as chewy and can be used as a replacement in equal quantities. These juicy little pockets of fruit are guaranteed to do your sticky toffee pudding justice.

Currants are produced in the same manner as raisins and sultanas. The difference is that a much smaller type of grape is used. Despite being smaller, they’re still packed with flavor and make a great date alternative.

But remember that currants deliver an intense tangy flavor and some sweetness. So, if you’re keen to offset the sweetness of your sticky toffee pudding, currants are the answer. They’ll introduce a slight tartness to the rich toffee treacle sauce while mimicking the texture of the dates.

While many dried fruits could be incorporated as a date alternative, dried apricots work particularly well in sticky toffee pudding. And for the best results, we recommend using the darker sulfur-free variety.

Dried apricots aren’t as sweet as dates, but their soft, fleshy texture is somewhat similar. They’re readily available and should be easy to find at your local store. Using dried apricots as a replacement will result in a scrumptious sticky toffee pudding your guest will love.

You may be surprised to see walnuts on this list. But nuts are an excellent option if you want to add texture to your sticky toffee pudding in the absence of dates. Granted, the texture won’t be the same as the chewy dates. Still, they’ll deliver a delicious twist to the traditional recipe.

Walnuts also lack the sweetness of dates but are one of the sweeter nut varieties available. They’ll bring a rich earthiness to the pudding and add a little crunch sure to wow friends and family. When replacing dates with walnuts, you can add the same amount in weight to your batter.

A beloved comfort food across the globe, sticky toffee pudding is traditionally made with sweet and chewy dates. But when dates aren’t an option, or you’re looking to try something new, you’ll need a suitable alternative. Selecting a substitute for dates in sticky toffee pudding from our list above will ensure the perfect pudding for any occasion.