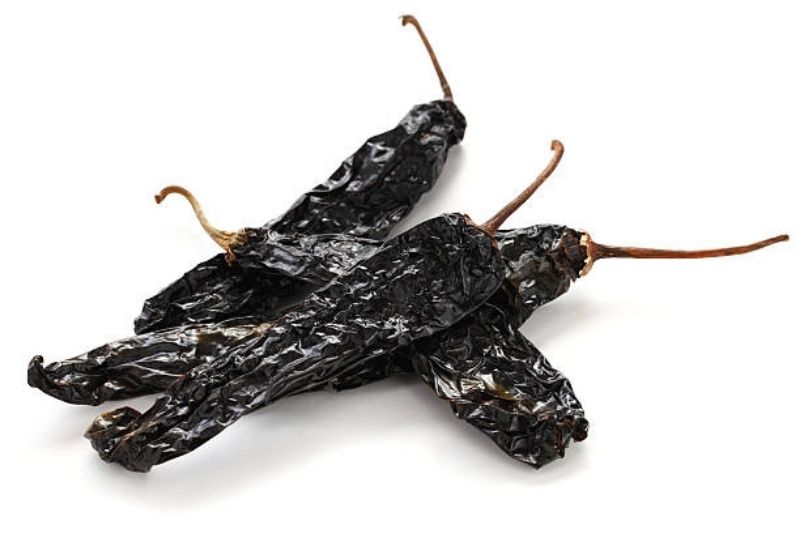 The Pasilla pepper originates from Mexico and is one of the most common peppers used in Mexican dishes. They are long, dark-colored peppers. And while they’re common in Mexico, they might be tough to find elsewhere. So finding a pasilla pepper substitute is essential.

What Are Pasilla Peppers?

Pasilla, pronounced “pah-SEE-yah,” has a black color that matures to a dark brown. And its flavor is relatively mild, with a peppery, earthy, sweet, acidic, and spicy taste. Therefore, these peppers aren’t very hot and are often partnered with other chilis in Mexican dishes.

The production and use of the Pasilla Pepper can be traced as far back as the Puebla region of Southern Mexico. And Pasilla peppers are currently grown specifically in Michoacan, Jalisco, Zacatecas, and Guanajuato.

Ancho peppers can be crushed into a powder for further processing. When using it as a Pasilla pepper substitute, remember that Ancho peppers are spicier. So, if you’re not a lover of hot, peppery food, you might need to use a smaller portion of Ancho peppers.

Anchos are an excellent substitute for pasilla chile peppers in Mexican dishes like tacos, salsas, and other dishes.

These peppers can be hard to come by in some areas, but they can usually be found in Mexican specialty shops. Using the same proportions in any dish is safe if replacing Pasilla peppers with Mulato peppers.

The dried version of the Mirasol chili, the Guajillo pepper, has a very fruity and earthy taste. And it also delivers cranberry and tea undertones. These peppers are frequently combined alongside Pasilla and Ancho peppers in Mexican stews and salsas.

These peppers are similar to the Pasilla pepper but are significantly hotter. In fact, they have a heat rating of up to 3000 SHU.

While using Cascabel peppers as an alternative, you must know how much you use in your meal. Even a small error in the quantity can make your dish considerably hotter. That said, the rich, smokey flavor of Cascabel peppers will enhance the flavor profile of your dish.

So they make an excellent pasilla substitute when used correctly, but that being said, a Scoville rating of 3000 SHU is still mild.

This is an extremely spicy substitute for Pasilla peppers. If you use these instead of Pasilla peppers, you’ll likely use very few because they’re so fiery.

Habanero peppers come in various colors but are most often yellow or orange. They’re delicious in most foods, but you can also use them to make hot sauces. And these little chilies are frequently stuffed with cheese and served as snacks.

The Jalapeño pepper is among the most commonly used peppers in many cuisines. And it can also be used in place of the pasilla pepper. They’re easy to find at supermarkets worldwide and highly nutritious. These chilies will fulfill all of your culinary demands.

Serrano peppers have been used in Mexican cooking for centuries and are still an incredibly popular ingredient today. These peppers are great for sauces, stews, and toppings. And they’re even better when roasted.

But beware: Serrano peppers are relatively hot. Due to their heat and spiciness, we advise you to implement a 4:1 ratio when used as a substitute.

Mirasol peppers are best known for their use in the Mirasol mole sauce. They have a heat value on the same level as the Jalapeño peppers.

These peppers are a vibrant red color. And while they’re great for soups, stews, sauces, and other recipes, they are ideal as a stunning garnish due to their vivid color.

You may find getting your hands on those sought-after Pasilla peppers challenging. But with these fantastic Pasilla pepper substitutes on hand, your recipe will not be compromised.