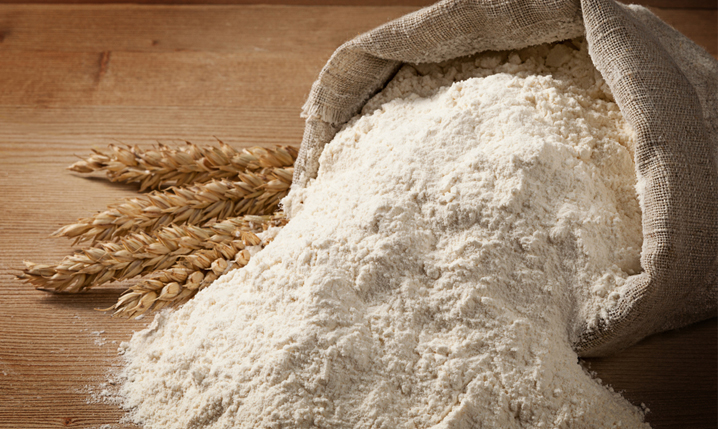 Wheat flour, otherwise known as regular flour or all-purpose flour, is a staple ingredient in dishes from all over the world. It is an incredibly versatile, gluten-containing flour which means that for whichever reason, you might sometimes need a wheat flour substitute.

Ever since it was first milled thousands of years ago, people have been using wheat flour to make bread, doughs, pastries, and even desserts. It comes in as many varieties as there are types of wheat. Modern industrial processes have also created different types of wheat flour for different uses, such as bread or cake flour.

If you need a substitution for wheat flour then read on to find out some of the best alternatives you can use in any recipe or situation.

Chickpea flour is made of ground-up garbanzo beans or chickpeas. It has been a mainstay in India for a long time and is now advancing to the Western market. It is just as versatile as regular flour but does not have gluten.

Chickpea flour works well in all sorts of dishes. It can be used as a thickening agent or coating for fried foods. Chickpea flour is one of the best gluten-free flours for baking because it binds easily once it is mixed with water and salt, unlike many other flours that are crumbly. However, be careful with ratios as you may need to use a slightly smaller amount, and be ready for an earthier taste than wheat flour.

Almond flour is another staple of gluten-free baking, made out of ground-up blanched almonds. It is just as versatile as all-purpose flour and can be used in all kinds of baked goods.

Almond flour is a great ingredient for savory and sweet baking because it binds with other ingredients very well. Many bakers like to use it for cakes and other desserts because of its light texture and slightly nutty flavor. Some people do not like using almond flour because of its comparatively higher fat content, but it contains healthy fats that are actually good for you.

Buckwheat flour has a similar name to wheat flour but is actually made from groats or buckwheat seeds. Despite the name, it is gluten-free.

Buckwheat is more nutritionally rich than wheat because it contains significant amounts of protein and fiber. Thanks to its nutritional properties and robust texture, many people use it in pancakes, muffins, or even noodles. However, buckwheat flour’s nutty flavor is too strong for many sweet dishes, so it cannot replace wheat flour in cakes and other desserts.

Rice flour is a staple of many Asian cuisines that has made its way west as a gluten-free substitute. It has a similar texture and weight to regular flour, making it a good replacement as well as a staple food in its own right.

Rice flour is excellent for thickening sauces and for coating foods in preparation for frying. It creates a perfectly crispy coating for fried chicken and tempura. Rice flour can also be used in baking. However, it has a bland flavor compared to wheat flour and absorbs liquid differently, meaning that you may need to adjust some of the ratios.

Spelt flour is similar to wheat flour because both are made from grains. It is made from whole grains of spelt, a type of ancient grain. It has a richer flavor than regular wheat flour, which is why it is rapidly gaining popularity.

Due to its similar texture, spelt flour can replace wheat flour in all kinds of recipes. It works well in desserts, creating a light, airy texture with a hint of acidic flavor. It can be used in bread, although you may need to experiment with ratios to get the texture right. Spelt flour is not a good substitute for people with gluten intolerances because it does contain gluten.

Coconut flour is an excellent gluten-free alternative to wheat flour and it is also loved by those on low carb diets. Packed with health benefits for digestion, blood sugar, and even heart health this flour is one of the best alternatives you can find.

This flour makes a brilliant alternative to wheat flour for baking in general and not just for those with special dietary requirements. You can try it for making cakes or even for a unique style of bread.

In the above list, you will find some excellent wheat flour (all-purpose flour) substitute ideas for any situation, whether you need something gluten-free, something equally versatile, or an alternative for something more specific!