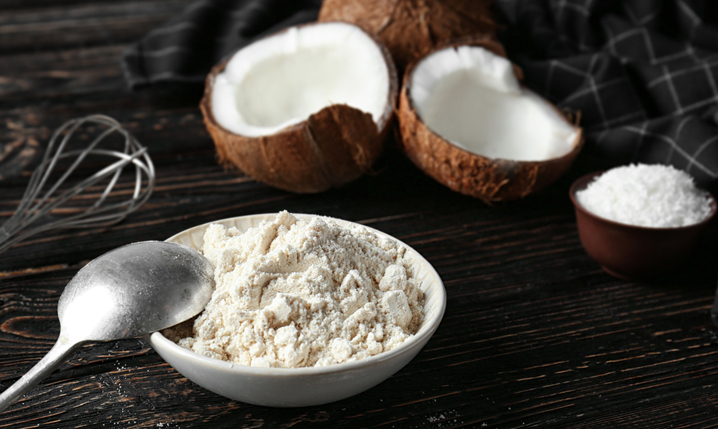 The versatile coconut lends itself to many uses, including coconut flour, an excellent alternative to wheat flour. Coconut flour is made by grinding up dried coconut flesh. Coconut flour was first milled in the Philippines before spreading to the rest of the world.

People with gluten intolerances and on low-carb diets love using coconut flour in gluten-free baking. According to some studies, it’s also packed with other health benefits and aids digestion, blood sugar, cardiovascular health, and weight loss.

However, coconut flour is still a specialty ingredient, and it may not be easy to find in your local grocery store.

If you run out of coconut flour, here are a few substitutes that you can make.

Like coconut flour, almond flour is a popular gluten-free baking substitute. It is more common than the coconut variety and you are more likely to find it in your local grocery store.

Almond flour has many similar properties to coconut flour. Both are gluten-free, rich in nutrients, and have similar tastes. You can use it for gluten-free baking or as a binding agent when making meatballs or other similar dishes.

Although almond flour also absorbs lots of moisture, it does not absorb as much as coconut flour so you will need to adjust your recipe to use more flour and less liquid. It also has more calories, which makes it a bad choice for those on a low-carb diet.

Cassava flour is another unique flour that comes from tropical areas, just like coconut flour. Cassava flour comes from starch found in the cassava or yucca plant, which is native to South America.

Rounding out the trio of excellent nut flours used in gluten-free baking is hazelnut flour. Hazelnut flour is made from ground-up hazelnuts and most likely originated in Italy. Since then, it’s become a staple of paleo and gluten-free diets.

Soy flour is another flour that comes from East Asia, like coconut flour. This one is made from milled soybeans. You can buy it in specialty markets or even make your own.

Soy flour has a similar nutritional profile to coconut flour. Unlike many substitute flours, it is also low-carb in addition to being gluten-free, making it a good choice for people on diets. However, its flavor is far more savory and bean-like than coconut flour. If you are using it as a substitute in a sweet recipe, increase the number of sweeteners that you are using.

Rice flour, made from ground rice, is a staple in many South Asian dishes. Just like coconut flour, it is gluten-free and has a neutral taste that makes it a versatile choice for sweet and savory recipes.

When replacing coconut flour, go for white rice flour as opposed to brown rice flour because the textures and flavors are more similar. However, keep in mind that rice flour is less absorbent than coconut flour. You will need to use about three times as much flour and maybe even decrease the liquid content in your recipe.