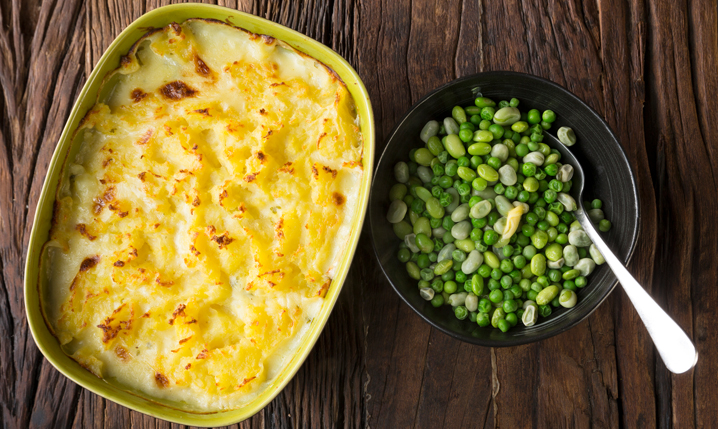 Fish pie (fisherman’s pie) is a traditional British dish made with poached white fish, a sauce made with the same milk that was used for poaching the fish, and a topping of mashed potatoes in place of pastry. The pie is then placed in the oven to bake until finished.

This delicious pie is well-deserving of making its way to your dinner table. But what about side dishes?

There are many good options for what to serve with fish pie.

Check out these top picks.

The first time I had fish pie we were served it with the traditional fare. A side of plump and delicious garden peas. I could be biased but I still believe that peas are the ultimate side to serve with fish pie.

You can either go for a crusty roll or some sliced white, it doesn’t matter. Bread and butter is a classic option to serve with fish pie.

With handsome amounts of butter, you will find bread dipped in a fish pie to be an irresistible combination.

Add an extra serving of peas on the side and you will have a delicious traditional meal on your hands.

Tenderstem broccoli, purple sprouters, or florets are all good broccoli options for serving alongside a traditionally cooked fish pie.

While it might not be the most popular side dish served with this dish it is one of the most delicious. Once cooked try tossing your broccoli in a little salt and butter for an extra burst of flavor.

Sweetcorn has become a popular side dish to accompany fish pie in the UK over the years. One thing that can be said about this is that it works.

While corn on the cob might be a bit much you can try boiling some sweetcorn and serving it alongside fish pie either on its own or with an additional veg item like broccoli or peas.

If you are already considering going double-carb with bread then why not go one step further and go double potato? A small serving of well-fried chips can be dipped into fish pie or enjoyed alone between mouthfuls.

The saltiness, the crispness of texture, the difference in flavor – these all add something to the meal.

Most green veg goes well with fish pie and asparagus is no exception. This popular vegetable is an upmarket choice and it has exploded in popularity across Britain as a vegetable to serve with pretty much everything.

The contrasting textures work well together with asparagus providing a little firmness to contrast the soft and creamy pie.