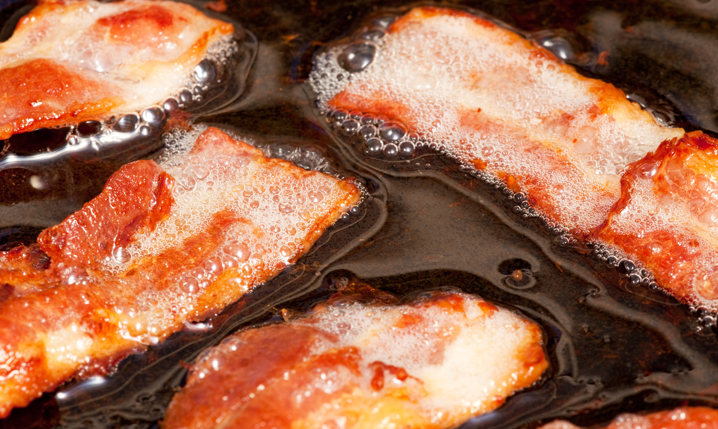 There are many reasons why you might need a bacon grease substitute. Whether it’s for spiritual reasons, or because you’re simply all out, there are plenty of alternatives that you should know about. In this article, we explore the best.

What Is Bacon Grease?

Bacon grease is collected after cooking bacon with the fats left to cool, it is used in popular recipes around the world for adding an extra dimension of depth and flavor.

It can be used for frying other foods, including bacon, but is also regularly used in baking and other recipes as an added ingredient.

Tallow differs from lard in that lard comes from a pig, but they are often mistaken for the same. Tallow is similar but it comes from either a cow or a sheep. What makes it such a fantastic bacon grease substitute is that whether you go for cow or sheep, tallow will have a great rich flavor.

Lard comes from a pig and is similar to bacon grease in many ways, so it could be the perfect substitute for many a dish you want to make. It is often used in fried chicken for its high smoke point, pastries, and last but not least – biscuits.

You may choose to want something else if you’re avoiding pork products for any reason.

Salted butter goes great in place of bacon grease when cooking more bacon. It is also great as a replacement when making crispy southern-style biscuits.

Butter can also be used in place of bacon fat when using it as an added ingredient, such as in mashed potatoes where butter is used more often than bacon grease.

Ghee is made of butter but it is more than that, so much more. Ghee is clarified butter and is used extensively in Indian and Bangladeshi cooking.

Ghee can be sweeter tasting than regular salted butter and so it makes a great bacon grease alternative for any recipes where you are baking.

Another good use case for ghee instead of bacon fat is when frying pancakes. Once you try it you’ll know that Ghee is special. Trust us, it will give your pancakes a whole new interesting, and delicious taste.

Sesame oil works well in so many dishes, yet it is not appreciated as much as it should be outside of the world of chefs and experienced cooks.

Sesame oil is an ideal alternative when cooking meats such as pork or chicken. It is not 1:1 in terms of taste because the flavor is different from that of bacon grease, but it is an alternative that will make your food taste great.

Peanut oil has a great earthy, nutty flavor and for that reason, it isn’t the best example of a great alternative to bacon grease. BUT the nutty flavor can work better in certain dishes, especially fusion recipes where people are blending American and Asian cuisine.

One thing to be said about peanut oil is that it should be avoided if you’re cooking for guests in case they have a nut allergy. Always make sure to confirm whether people have allergies or intolerances before cooking with ingredients that are known to be problematic in some cases.

It is common in some parts of America to use bacon grease for cooking roasted potatoes, parsnips, and other vegetables. Goose fat makes an amazing alternative, especially for roast potatoes which is one of the ways that the British traditionally cook their roast potatoes.

You can use regular salted butter, clarified butters such as ghee, or even interesting flavorful peanut oil as an ideal bacon grease substitute. With so many good options there’s no reason to worry about creating a delicious dish with one of the above options.