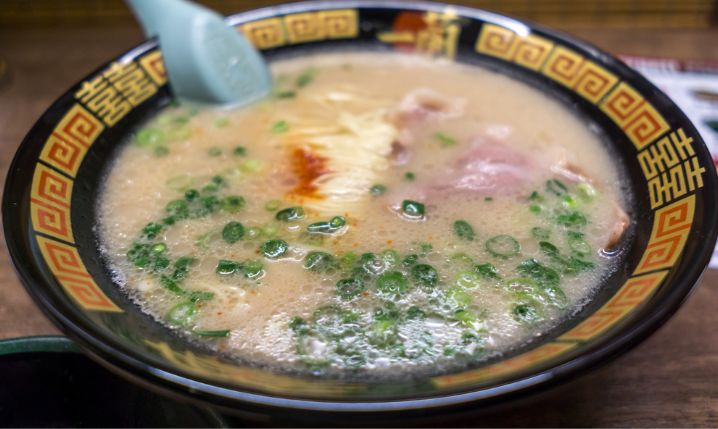 Undertaking a tonkotsu vs. shoyu comparison could be enlightening for those who often confuse these two similar dishes. Granted, there are plenty of similarities between tonkotsu ramen and shoyu ramen. But, there is a considerable disparity in the foundation of each dish, ultimately separating them.

Tonkotsu ramen is a Japanese dish traditionally made with a broth made from pork bones. This dish originated in the Fukuoka prefecture of Japan and has become a prevalent dish nationwide.

The broth is simmered for hours until it attains a rich, creamy flavor and thicker texture. It’s then served with chewy wheat noodles, vegetables, and a piece of slow-roasted pork belly.

This ramen dish is often garnished with green onions, nori (seaweed), boiled eggs, bamboo shoots, and pickled ginger. The pork may be replaced with roast chicken in some cases.

The shoyu ramen dish typically comprises wheat noodles in a broth made from dashi stock and soy sauce. The dish is thought to have originated in China. But it has been adapted over time and is now popular in Japanese cooking.

One of the most distinguishing features of shoyu ramen is its clear, dark-brown broth. This unique flavor is achieved by combining soy sauce with chicken bones or dashi stock. The result is a rich and savory broth that is often further enhanced with salt, ginger, and onions.

Shoyu ramen’s noodles should be firm. And you’ll often see the dish topped with boiled eggs, spring onions, mushrooms, nori, and a portion of chicken or pork.

While shoyu ramen can be found at many ramen shops across Japan, it is also a popular dish to make at home. With its complex flavors and simple ingredients, shoyu ramen is a delicious and satisfying meal anytime.

Tonkotsu Vs. Shoyu: What’s the Difference

Tonkotsu and shoyu ramen are almost identical in their ingredients. The primary difference between these dishes is the broth.

When making the broth base for tonkotsu ramen, pork bones, fat, oil, onion, garlic, and ginger are typically incorporated. However, chicken bones are sometimes also used to make the broth.

Soy sauce and dashi stock are at the heart of the shoyu ramen broth. In fact, shoyu is Japanese for soy sauce, indicating its importance in the dish. That said, chicken stock, sesame oil, garlic, and ginger are also included in the broth.

In terms of flavor, tonkotsu ramen broth delivers a deep definitive sweet and salty pork flavor from the pork bones. These ingredients offer an unforgettable merging of sweet and savory flavors.

Because soy sauce is the primary ingredient in the shoyu ramen broth, it’s much saltier than tonkotsu ramen. The dashi stock also offers a savory seafood flavor. And the resultant combination is a rich, salty, umami taste.

Tonkotsu ramen’s broth is thicker and creamier than the broth in the shoyu ramen dish. This is due to the difference in preparation and ingredients. On the other hand, the broth on shoyu ramen is thinner but delightfully smooth.

The broth for tonkotsu ramen comprises pork bones which are boiled and simmered for a long time. The objective is for the bones to break down and release their flavor into the water. It can take as long as eighteen hours to produce a broth that is thick and creamy.

For shoyu ramen stock, katsuobushi, kombi, and water are first boiled and strained to make the dashi stock. This is then combined with chicken stock, ginger, and garlic sauteed in sesame oil. The broth is allowed to simmer while the dish’s other components are prepared.

Perhaps you’ve seen these ramen dishes side-by-side with wheat noodles, green onions, pickled ginger, and a chunk of pork belly. And it’s possible you thought they were the same dish, as many would. But the inability to tell these dishes apart is a thing of the past. Armed with this tonkotsu vs. shoyu comparison, you can now spot the difference with ease.