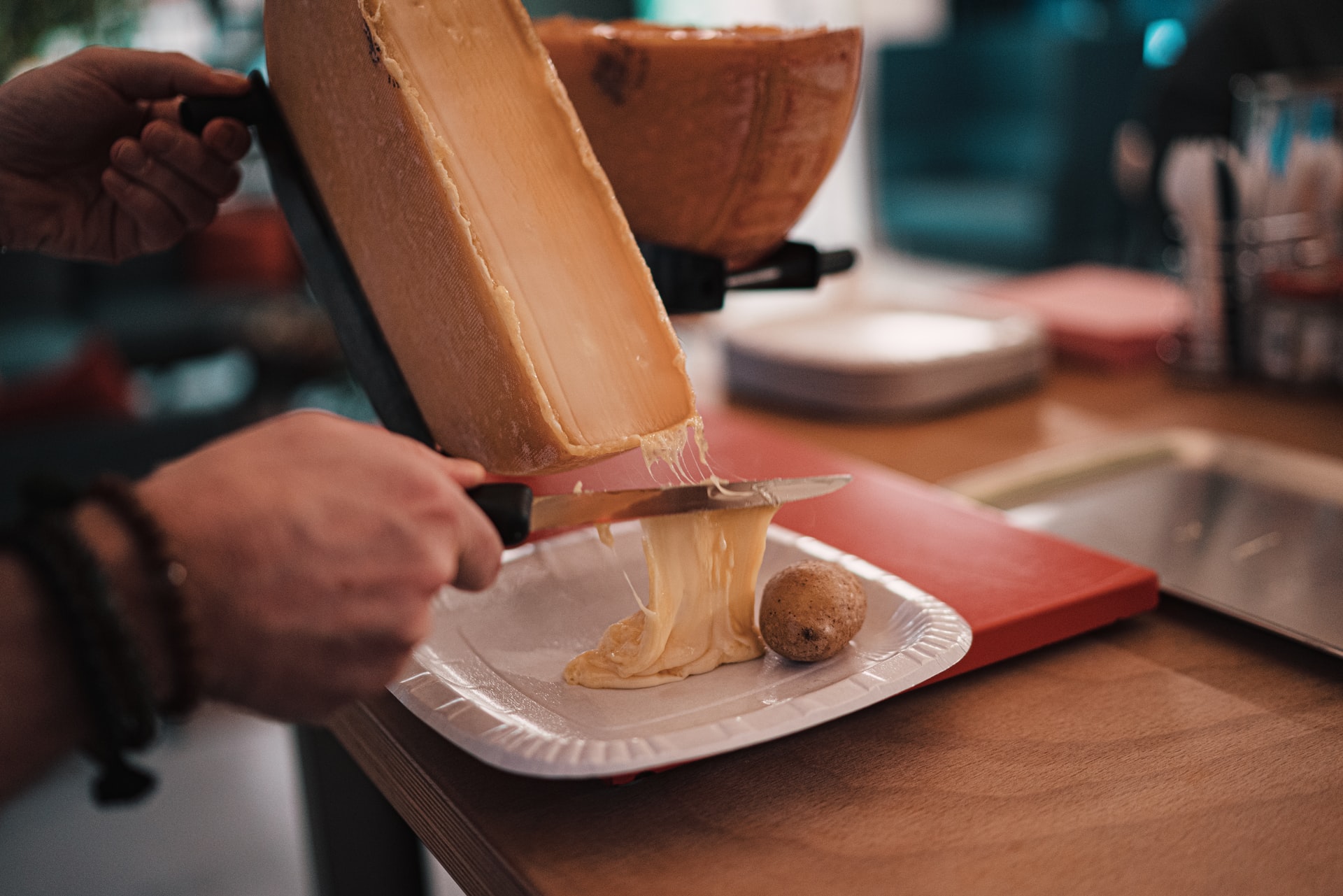 Raclette cheese is a sought-after soft cheese produced in the Alpine regions of Switzerland. It’s made using mild and special bacterial strains and soaked in brine to age for 3 months.

In restaurants, you’ll often see it melted and poured over bread, meat, or veggies. And Raclette cheese can be used in fondues because of its smooth texture and mild flavor.

Because it is region-specific, Raclette is sometimes hard to find in grocery stores. As such, people are always looking for cheeses with a mild and nutty flavor as a substitute. So, if you’re looking for substitutes for Raclette cheese, here are a few you can try.

Young Gruyere cheese aged 6 to 9 months is one of the common Raclette cheese substitutes. It’s a cheese made from cow’s milk with a coarse texture and earthy flavor. Gruyere is high in fat and goes well with dishes that require melted cheese.

Use young Gruyere in pastries, omelets, creamy soups, and fondues. And you can include it in platters with meats like braised beef, shrimp, or chicken.

A full-fat young Appenzeller aged 3 to 4 months is another ideal substitute for Raclette cheese. Appenzeller is a strong-smelling, hard Swiss cheese made from cow’s milk that has been around for over 700 years.

It has a mild, nutty flavor and creamy texture like Raclette and is often melted over potatoes and pasta dishes. Appenzeller is aged using herbal brine that gives it an interesting bite making it an excellent ingredient for grilled cheese sandwiches.

Gouda cheese is one of the readily available substitutes for Raclette cheese. It’s soft, light, and has a sweet flavor. And it’s made from whole cow’s milk aged for 1 to 20 months.

A young Gouda is an ideal ingredient for fondues, while an aged Gouda tastes amazing on crusty bread with wine. You can also incorporate Gouda cheese in a cheese platter with fruit.

Emmental cheese is another perfect Raclette substitute, aged for 2 to 18 months. It stands out from other Raclette cheese substitutes because of its eyes and yellow color. The eyes form during fermentation, which gives Emmental a distinct flavor.

You can use a young Emmental to substitute Raclette cheese in soufflés or baked dishes. And it makes a great addition to any charcuterie, along with savory pickles and cold-cut meats.

You can use aged Asiago in any recipe that calls for melted cheese. And it’s excellent in salads, sauces, and pasta dishes. Fresh Asiago is best on sandwiches and panini.

A low-fat cheese that makes an ideal Raclette substitute is Jarlsberg, a popular Norwegian cheese.

It has a nutty, sweet flavor and a semi-soft texture, making it one of the best substitutes for Raclette cheese. Use Jarlsberg to make grilled cheese dishes or in a cheese dipping sauce for roast or fried potatoes.

Beemster is an excellent tasting cheese from the Netherlands popularly used in Dutch recipes. It is made from milk produced by cows raised in the Dutch Beemster Polders, making it an exclusive cheese.

You can use Beemster cheese in creamy soups or pasta dishes that require sweet, creamy cheese. There are also spiced Beemster cheeses available if you want substitutes for Raclette cheese with a different flavor.

Kasseri is a Greek cheese from the pasta filata family made from unpasteurized sheep’s and goat’s milk. This is a semi-hard cheese with a light, milky, and sweet flavor used as a table cheese.

A full-flavored cheese, Kasseri goes down well on sandwiches, pizzas, and omelets. It is also used in many Turkish dishes, paired with wine.

If you’re looking for substitutes for British Raclette cheese, Cheddar cheese is the best pick. It’s named after Cheddar, a village in England where it was first produced.

You may use white or yellow cheddar cheese, depending on the dish you are making. Cheddar has a mild flavor like Raclette with nutty undertones. And it’s ideal for grilled recipes such as grilled cheese sandwiches with salami.

Raclette cheese is a versatile cheese used in a variety of dishes. But it’s most often used as a fondue cheese due to its melting properties. When looking for substitutes for Raclette cheese, look no further than our above recommendations. You’re sure to find the perfect replacement for your dish.