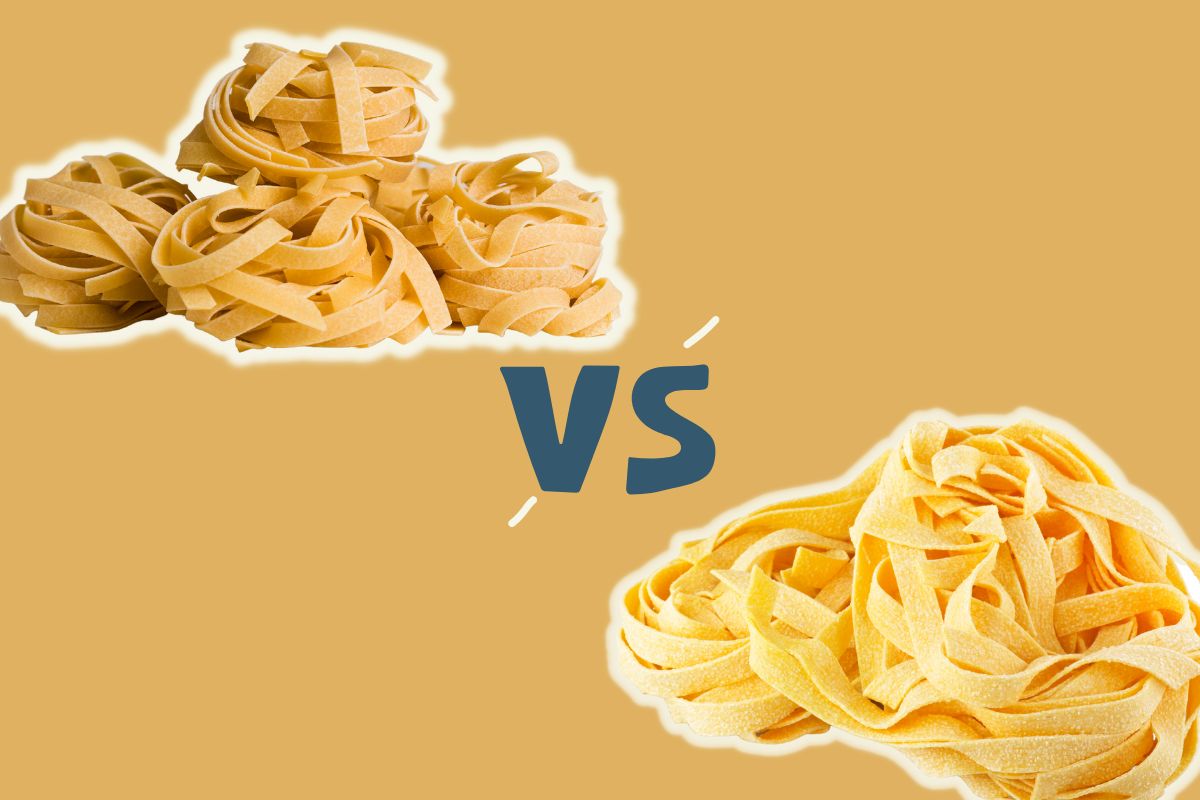 Despite their similar appearances, Fettuccine and Tagliatelle have their own unique flavor profiles. They come in many shapes and sizes, as well as various colors and textures. Fettuccine is thicker than tagliatelle, but both can stand in for each other.

Tagliatelle and fettuccine are both thick long flat pasta types. However, they are referred to as tagliatelle in the Marche and Romagna areas. And in Tuscany and Rome as they’re known as fettuccine.

Sometimes, it is still difficult for individuals to tell them apart and appreciate the difference between these two pasta varieties. Let’s take a closer look at the fettuccine vs. tagliatelle debate.

Fettuccine is a type of pasta, and it literally translates to mean “little ribbons”. And, obviously, that’s exactly what it looks like. Southern Italy’s Tuscany, Rome, and Lazio are known for their love affair with this type of pasta.

The thickness ranges from 3mm to 5 mm. At two times the width of tagliatelle, fettuccine has more surface area. Fettuccine strands are long and flat, which gives them their name. Flour and water are used in the preparation of this pasta to ensure that it has a long shelf life. To enhance its flavor, it’s often used in dishes with a variety of herbs. Ragu, a meat-based tomato sauce, or alfredo sauce are popular accompaniments for this pasta.

In fact, fettuccine alfredo is one of the most popular dishes in Rome.

Wheat flour and egg are the primary ingredients in tagliatelle, which is a broad, flat pasta. It’s longer and thinner than fettuccine. It’s most often used in more delicate dishes with a thinner sauce.

Tagliatelle is a pasta that hails from Northern Italy. And it’s popular in Italy’s Marche and Romagna areas. The Italian verb “tagliare”, which means “to cut”, is the source of the word “tagliatelle.”

A rolling pin is used to roll out the dough. After rolling out the dough, it is sliced into strips. The width of the noodles ranges between 6mm and 9mm. And, due to their flat, ribbon-like appearance, they resemble shoelaces. Tagliolini is a long cylindrical variation of this pasta.

An Italian-style beef sauce is traditionally served alongside it. In addition to egg and cheese pasta recipes, there are tomato and basil sauces for tagliatelle pasta.

Fettuccine Vs. Tagliatelle: What’s the Difference?

The fundamental differences between fettuccine and tagliatelle boil down to a few essential points that need to be highlighted separately.

On closer examination of fettuccine vs. tagliatelle, they clearly have many differences. But since they are both long and thin, they can be used as substitutes for each other.