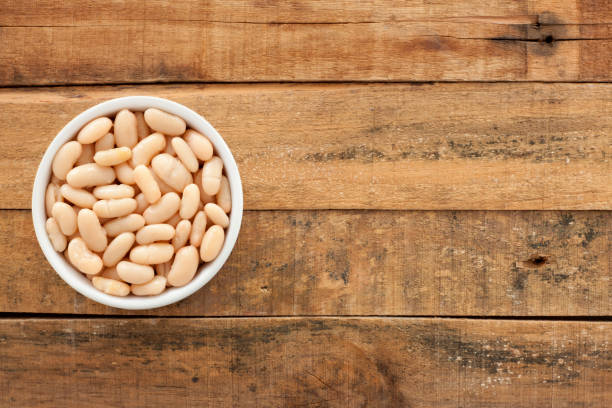 The Cannellini Bean is known as White Kidney Bean in English. Its more common name, Cannellini, is Italian, and the bean is very popular in Italian cuisine. In this article, we’ll look at some of the best cannellini bean substitute options for any dish.

The cannellini bean is often used in soups and salads as well as pasta. Taking its origin from Peru, Italian immigrants harvested the legumes and introduced them to Europe in the 1500s.

Many people favor this ingredient because of its subtle nutty flavor that elevates the flavor profile of a dish. Cannellini beans also add great texture to dishes, especially soups and sauces.

In this article, we’ll explore some excellent substitutions and alternative options for cannellini beans.

Great northern beans are a variety of beans popular in North America. They are cultivated in cold temperatures and have a hard exterior. They are delicate beans and small despite their name. They have a subtle flavor making them great for soups and stews.

They have a similar nutty flavor to Great northern beans and can be substituted for the other almost perfectly. They have firmer flesh than their larger counterparts, so they may need more cooking time. It acts as a form of balance as it has a smooth texture and neutral flavor that goes well with both sweet and savory dishes. They also add bulk without altering the taste.

Navy bean, also called pea bean, is a native American variety of beans smaller than many types of beans. It is oval and flattened, resembling a pill. It is used in dishes such as baked beans, pies, and soups.

Navy beans have tough skin and dense flesh, so it needs more cooking time. Compared to Cannellini beans, they are smaller and cook up faster. They are also softer and therefore are used in quick soups and dips. When substituting Navy beans for Cannellini beans, you may have to add your beans later than you would because Navy beans lose their shape faster.

Lima beans are also referred to as butter beans. They are a good source of fiber and protein. They also are almost fat-free and have an abundance of minerals such as calcium, magnesium, sodium, etc. It holds flavor and has a buttery taste to it. It has an earthy flavor that comes out when cooked.

Lima beans can be used as a substitute for Cannellini beans in soups. However, due to their small size, cooking lima beans at a high temperature can cause them to fall apart. It is best to simmer to extract that buttery feel peculiar to these beans.

Kidney beans are a variety of common beans. It is so named for its shape and color, similar to human kidneys. This bean is packed with nutrients such as B vitamins, protein, and minerals. It features prominently in the Caribbean, Asian and Mexican cuisine.

They substitute well for cannellini beans because of their similarity in size, texture in dishes, and how long it takes to cook. However, kidney beans have a more earthy flavor which is more distinct than the cannellini bean’s more subtle flavor. Kidney beans are also bright red, unlike white cannellini beans. So, if appearance is vital in your dish, this may be the best option. They go well in salads, soups, dips, and chilis, where kidney beans can take on more robust flavors.

Garbanzo beans are also popularly known as chickpeas. These beans are high in protein and minerals. They feature heavily in Mediterranean, Indian, and Middle Eastern cuisines and are very versatile nutrient-dense foods.

Black Beans are a good substitute for cannellini beans when you’ve run out of other options. These beans are sweeter and will change the visual appearance of your dish but they have a similar texture.

Since these beans are available in most stores they are also a convenient substitution in a lot of cases.

As for the added sweetness, this isn’t a problem in sweeter dishes, but you can always compensate for this by adding a little extra salt or even some spices to add a little warmth to reduce the sweet taste.

Cannellini beans can be easily substituted by any of the beans listed above. They go well in dishes like soups, sauces, and salad. It is essential to take note of their peculiarities so that you can choose the best-suited alternative for your dish.