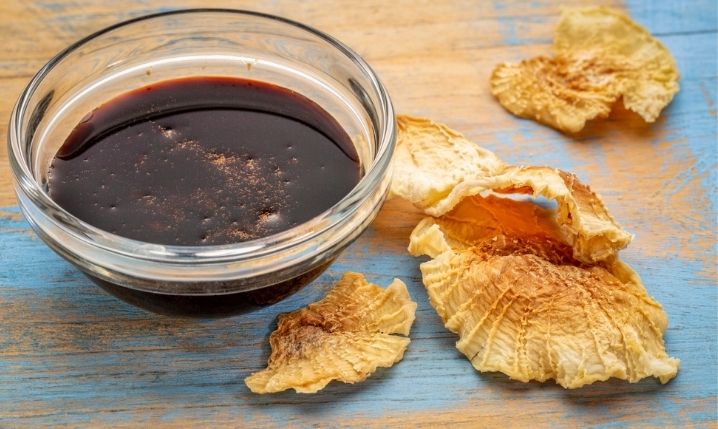 Yacon syrup originated in South America and is derived from the yacon plant’s roots. This natural syrup provides a low-carb alternative to the common cane sugar syrup variety. But if you’re looking for yacon syrup substitutes with similar health benefits, we’ve got you covered.

For many years, this wonder syrup was used for medicinal purposes. However, while yacon syrup comes with many advantages, there are also drawbacks to using it. Consuming too much yacon syrup can result in stomach aches, bloating, nausea, and more.

As such, this article will examine the best replacements for yacon syrup without the nasty side effects.

What is Yacon Syrup?

High in potassium and antioxidants, yacon syrup has been a natural medicine for natives of the Andes mountains for centuries. In fact, the earliest record of yacon syrup being used as a remedy for constipation dates back to 1615.

The yacon plant’s root is harvested to make yacon syrup. The juice is extracted from the roots using an eco-friendly production process. Then it is sifted and evaporated. The result is a thick, sweet, and dark golden syrup.

Yacon root syrup functions much like other fluid sweeteners when used in baking. Additionally, it can be added as a sweetener to iced tea, smoothies, coffee, and tea. It’s also an excellent topping for pancakes.

This is one of the best syrups for people who need to monitor their sugar intake. This is because yacon syrup has a low glycemic index and won’t raise blood glucose levels.

Many individuals believe that yacon syrup is healthier than most other syrup sweeteners, especially cane sugar syrup. But it’s not as widely available as other sweeteners. So, if you need a healthier syrup right now, you might have to settle for one of these great alternatives.

Agave syrup, sometimes called agave nectar, is a type of natural sweetener. And its consistency lies somewhere between that of honey and yacon syrup. This nectar is made from the agave plant’s sap, extracted in the early spring. After that, it’s reduced similarly to yacon syrup to enhance its sweetening properties.

Due to the reduced glucose and sugar level in agave nectar, it has a lower glycemic index. Agave is sold in bottles and comes in a range of hues. It is well known that agave nectar’s rich, sweet flavor increases with color depth.

Blackstrap molasses, which has a rich flavor many people enjoy, is another excellent yacon replacement. It’s a byproduct of the processing of refining sugar cane.

Blackstrap molasses and yacon syrup taste and look very similar. However, due to its high sugar concentration, molasses has a concentrated sweetness and a deep caramel flavor. It can, however, leave a slightly bitter aftertaste.

You’ve probably had maple syrup on your French toast or pancakes. But it can be used in any context where yacon syrup would be acceptable.

However, the main component of maple syrup, made from maple tree sap, is sucrose. Numerous nutrients, such as iron, zinc, and manganese, are also present.

Because maple syrup is produced similarly to yacon syrup, it has comparable consistency. However, maple syrup’s flavor is slightly less intense than yacon syrup’s.

Xylitol is an excellent substitute for yacon syrup, with even fewer calories and a lower glycemic index. It’s a natural sugar alcohol found in numerous fruit and vegetable plants. It comes in crystalized granular form, like sugar, and is widely employed to sweeten beverages such as coffee and tea. You can also use it for baking and to sweeten porridge and cereal.

Sugar-free sweets, cold drinks, and some oral care products frequently include xylitol. The sweetness of xylitol is somewhat comparable to cane sugar, just slightly less sweet. It does, however, contain 40% fewer calories.

Honey is a delicious and sweet treat. To add taste, it can be drizzled on waffles, peanut butter sandwiches, smoothies, and other foods and beverages. The deep, rich honey flavor provides a delicious replacement for yacon syrup in almost every situation.

Since ancient times, people have utilized honey as a natural sweetener. It’s also often used for its medicinal benefits. Honey is known to be a natural antibiotic and is a common remedy for cold and flu symptoms.

This list of yacon syrup substitutes offers several options when yacon syrup is not available. But it’s vital to note that they may not all provide the same health benefits as yacon syrup. Therefore, they must be used in moderation.