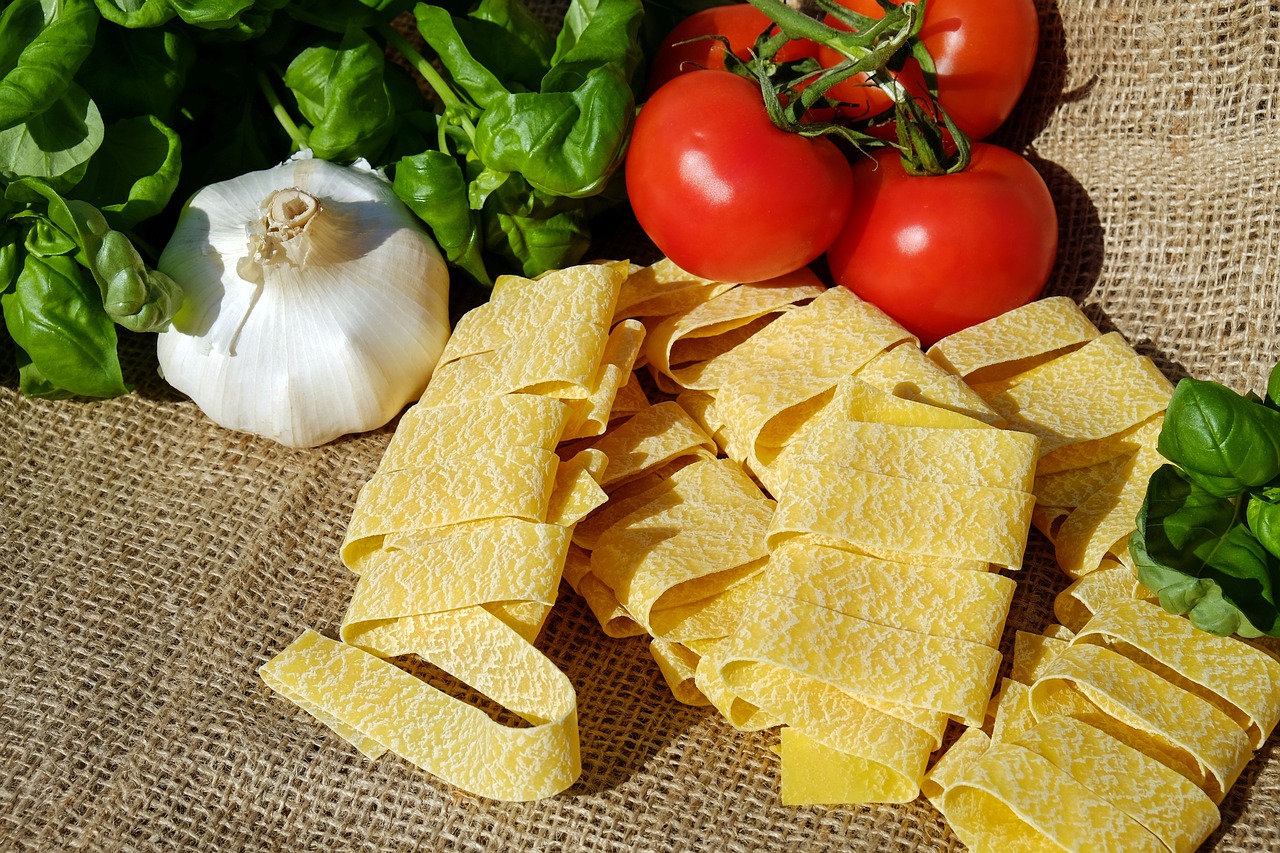 Tagliatelle is a variety of pasta taking origin from the regions of Emilia-Romagna and Marche in Italy. The pieces of this variety of pasta are long and flat like ribbons resembling fettuccine, another type of pasta.

Like other kinds of pasta, tagliatelle can be served with sauces, although the most common one is Bolognese sauce. It is made from flour and egg in the ratio of one egg to one hundred grams of flour. The pasta is flat in appearance, rough and porous in texture, so it goes with primarily thick sauces. Different types of tagliatelle depend on the size and thickness of the cut when making the pasta.

The creation of this dish is often credited to a talented court chef in the 1400s. Legend has it that he took inspiration from Lucrezia d’Este’s wedding hairdo. Tagliatelle can be sold as either straight or curled pasta, and it can come in two colors- white and green. The green-colored version is colored by spinach extract. For traditional dishes, tagliatelle is fresh and made from scratch.

But are there substitutes for tagliatelle when you run out, and the recipe calls for it? Are there other types of pasta that you can use successfully? This article lists four pasta substitutes that would do a good job standing in for tagliatelle.

Fettuccine is famous in Roman and Tuscan cuisine as the main pasta. As the literal translation of its name (little ribbons), this pasta is a flat and thick ribbon pasta. It is made of flour and egg,  like typical pasta. Fettuccine is usually eaten with chicken or meat ragu. And it’s the main pasta used in fettuccine Alfredo, a creamier pasta dish. While it is usually made fresh, dried fettuccine can be gotten from grocery stores.

The best substitute for tagliatelle is fettuccine, as they are both ribbon pasta. Both are long and flat pasta varieties with slight differences. Tagliatelle is broader and thinner than fettuccine. This makes them easier to be used interchangeably. Fettuccine is easier to find in dried form in grocery stores if you don’t want to make them from scratch. The cooking time for this dish is about eight to ten minutes.

Linguine is a type of pasta similar to fettuccine, but it is more elliptical than flat. It is wider than the popular spaghetti and not as broad as fettuccine or tagliatelle. Originating from the province of Genoa in Italy, this pasta is served chiefly with sauces like pesto, tomato, and fish-based sauces. It is a long pasta noodle that can be made from different flours like white flour, potato flour, whole wheat flour, and water. Linguine is lighter and more delicate, which pairs well with light sauces.

Using linguine in place of tagliatelle is an excellent idea as they are both long pasta. Although it isn’t as broad as tagliatelle, it can also step in as a substitute.

Pappardelle is a type of ribbon pasta originating from the Italian region of Tuscany. The pasta is very broad and flat, making you “gobble it up” as you eat, lending to its name (“pappare” meaning “to gobble”). It is made from flour and egg and pairs well with heavy meat sauces like meat ragu, bolognese, carbonara, etc. They boil anytime between 7-10 minutes.

As a substitute for tagliatelle, this broad pasta is terrific as it’s also a long, flat, thick, ribbon pasta. Pappardelle also goes well with seafood and can be gotten from the grocery store when you’re in a pinch.

Tagliolini, also called Taglierini, is a variety of ribbon pasta originating from Piedmont and Molise in Italy. It is made from flour, salt, and semolina. This pasta is similar to tagliatelle but thinner and pairs well with light sauces, seafood, or fish.

Its flat, thick and long ribbons make tagliolini an excellent substitute for tagliatelle. Tagliolini may taste a bit different as it has semolina in its dough. It goes well with meat sauces like ragu and bolognese sauce. They are also faster to boil as they cook in six minutes.

Tagliatelle is a great variety of pasta that goes well with thick sauces because of its porous texture. So, finding substitutes similar to this pasta would mean choosing thick, broad, and long noodles, like tagliolini, pappardelle, linguine, and fettuccine. Fettuccine is the closest substitute to tagliatelle in composition, length, thickness, breadth, and recipes.