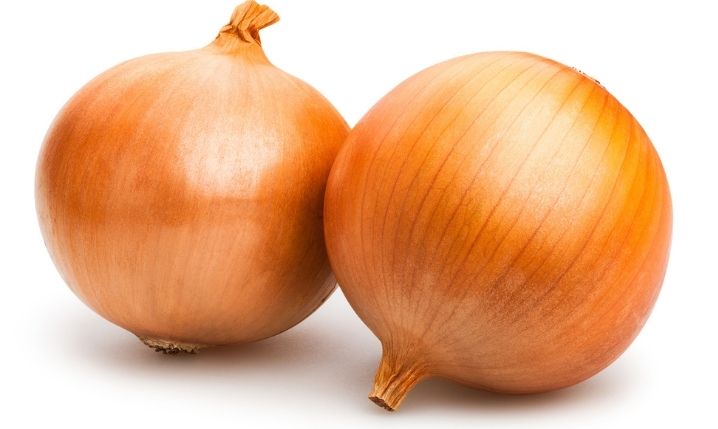 Spanish Onions are a type of yellow onion, sometimes known as brown onions. They are not exactly the same as yellow onions because they are milder. This makes them great for using raw in sandwiches, salads, and similar dishes. This article will explore what you need to know about the Spanish onion and what makes a good substitution in different situations.

What are Spanish Onions?

Spanish Onions look similar to yellow and white onions. They have a brown appearance and they have an almost identical aroma.

They aren’t as potent as other onions. They taste sweeter because of being grown in low soil which also means they have higher water content. These are the reasons why they aren’t as ideal for cooking but are often used in raw dishes for their crunchiness and mild flavor.

The Spanish Onion is often used in salads, tortillas, relishes, and some grilled dishes as well as soups and sofrito.

The main difference between the two is the flavor. Yellow onions are stronger and more robust with less water content. This means they are better for cooked dishes such as soups, sauces, and stews.

If you’re preparing a raw dish that doesn’t require cooking the onion then there are better options.

A sweet onion substitute will work well with Spanish onions for garnishes, salads, and similar.

You can use almost any sweet onion that you can find in the grocery store, but Vidalia onions are one of our favorites.

While these onions are stronger in terms of flavor than a Spanish onion they also have some mild sweetness. This means they are a versatile option as far as substitution requirements go.

Use one white onion for every Spanish onion that you would use in your recipe.

Red Onions have a strong and aromatic flavor that makes them less ideal for certain salads as the taste can easily overwhelm other ingredients.

However, red onions make a fantastic alternative as a garnish for foods like hot dogs and tortillas where you have other strong ingredients and don’t mind the fuller flavor of the onion in the dish.

With red onions, less is sometimes more, so use half the amount of red onion as you would use Spanish onion when using it as a replacement in any recipe.

There are lots of types of onions that you can use as an alternative to the Spanish onion. Hopefully, this article has given you a couple of ideas, or better yet, an ideal substitute to use in your dish.