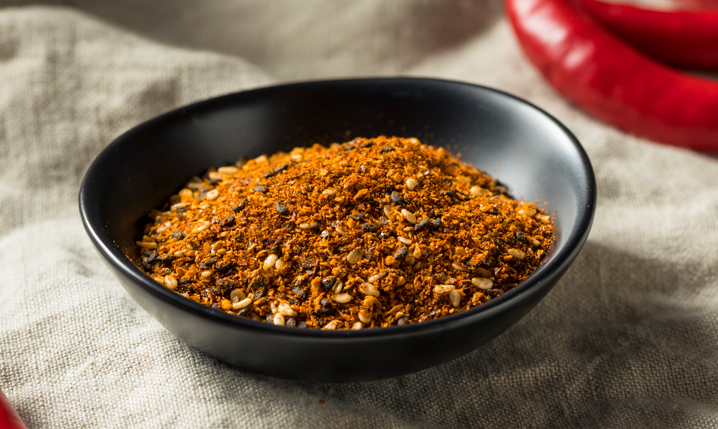 Shichimi Togarashi is also known as ‘Japanese 7 Spice’ and ‘Nanami Togarashi.’ This spice is used a lot like salt and pepper, where it’ll be placed at the table or wherever you want to eat, allowing the hungry eaters to sprinkle it over their food as desired.

The flavor is distinctive and unique, with the primary flavors being salt and spice. The other notes include the nuttiness from the various seeds and the aromatic flavors from the orange peel and Sichuan pepper.

Here are some simple and effective Shichimi Togarashi substitutes.

One of the most straightforward substitutes would be adding a little salt and some dried chili flakes into a bowl and mixing them to sprinkle atop your food. This approach will give you those primary flavors.

What you can then do is add in anything else you’ve got. It isn’t likely that you’ll have everything on hand, so use what you’ve got on the spice rack and go from there.

You can even sub individual spices, for example, regular sesame seeds for black/golden sesame seeds.

Not everyone has access to dried chili flakes, so you can also substitute in cayenne pepper or chili powder instead. Use these sparingly as if you add too much? Well, you’re really asking to burn your tongue out your mouth.

Then repeat the process above by adding in any other ingredients you’ve got access to right now. For example, you could zest a little bit of orange or mix in some Sichuan pepper.

Furikake is another Japanese condiment that people will often sprinkle over cooked rice, fish, and various vegetables. It has a lot of the same ingredients as Shichimi Togarashi, despite being different.

While it won’t taste the same, it does make a good substitute in a pinch. Furikake consists of dried fish, sesame seeds, sugar, salt, monosodium glutamate (MSG), and chopped seaweed. It can also include other ingredients, such as egg, bonito flakes, and more. In general, you should go for the more simple Furikaki as a substitute or Shichimi Togarashi.

You can also go an extra step and add in some additional dried chili flakes for the spice.

Ichimi means “one taste,” Ichimi Togarashi is the Japanese product name for plain chili flakes. So you can even use plain chili flakes and call them Ichimi Togarashi the next time you do. That said, authentic Japanese products often have smaller flakes with uniform colors, often from the outside of the chili rather than the hotter seeds. Of course, you can always add a little salt and any other ingredients you have handy with these.