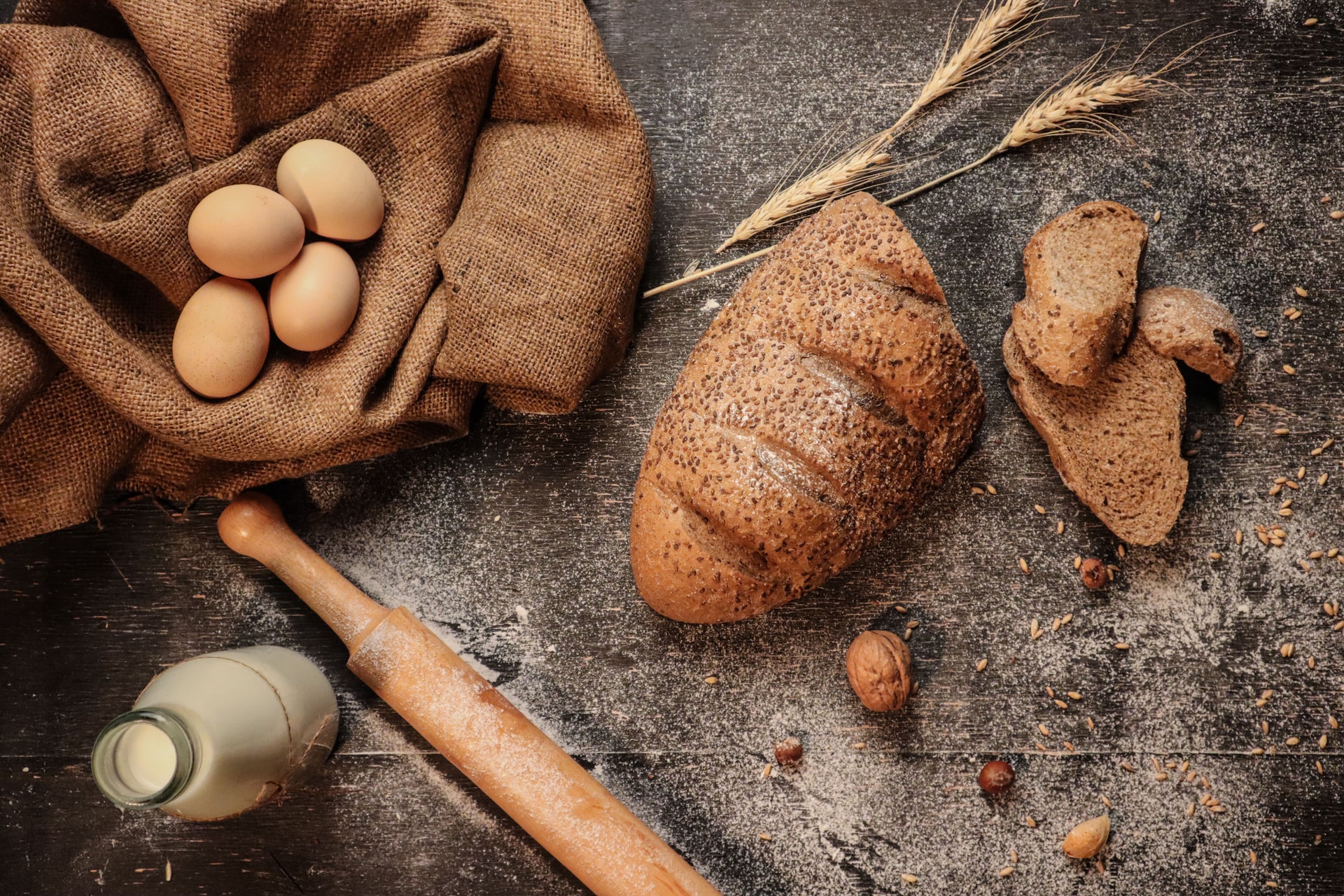 Rye bread is a kind of bread made from varying proportions of flour derived from rye grain. Depending on the portions of the type of flour used, the bread could be light or dark in color. Heavier than regular bread made from wheat flour, it contains less gluten, giving it a dense texture.

During the Middle Ages, rye grain grew in many European countries like Russia, Latvia, Ukraine, Estonia, Poland, etc. It was popular because rye tends to grow well in the cold and wet European plains.

This nutritious bread comes in different varieties depending on the ratio of rye grain flour to wheat flour. Pure rye bread contains only rye flour giving the loaf a dense, dark, flat appearance with strong earthy flavors. But lighter-colored rye bread is usually made from a rye and wheat flour mixture. These have an airy texture, lighter appearance, and less potent flavors.

Rye bread contains a significant amount of fiber and a low fat level, helping considerably with digestive health. It has a lower glycemic index than white bread and is packed with nutrients like manganese, selenium, vitamin B6, etc. It goes great with toppings like smoked salmon, cheese, jam, or honey as a sandwich.

While the benefits of rye bread are numerous, you may find yourself needing to replace this wholesome bread. Perhaps you’ve simply run out of rye bread or are not keen on the taste and texture. If you’re looking to make a substitution, this article lists four of the best substitutes for rye bread.

Sourdough bread is bread made from fermenting dough using Lactobacillaceae and wild yeast. This is one of the oldest forms of grain fermentation. And the live culture confers a sour taste on the bread from lactic acid produced by the process. Similar to rye bread, it is rich in fiber.

This bread is easy to digest and contains plenty of nutrients. It has a lower glycemic index than white bread and low levels of gluten, making it tolerable to gluten-sensitive individuals.

Sourdough has a tangy flavor due to fermentation and a hint of sweetness that balances out the sour taste. Although it is commonly eaten with soup, it can be eaten like any other bread and pairs well with any toppings.

Whole wheat bread is made from flour that is partly or wholly milled from whole wheat grains. This type of brown bread contains all parts of the grain as they occur naturally. And it’s an excellent substitute for rye bread as it’s packed with nutrients.

This bread is rich in fiber and more nutritious than refined wheat grain. It has a low loaf volume and boasts a firm and gritty texture similar to rye bread. Whole wheat bread sports a dark and rough crust, crumbly appearance, and slightly bitter flavor. Denser than white bread, it has less gluten and has a complex nutty and earthy taste.

Gluten-free bread is bread made from flour, naturally free from gluten. This is a fantastic substitute for rye bread due to the low levels of gluten in it. Examples of this bread include those made from grain and legume flours like rice, almond, buckwheat, chickpea, sorghum, millet, etc.

The texture and taste of this type of bread depend on the flour being used. Gluten-free bread tastes and smells like regular wheat bread with a soft, chewy open crumb. It is the best rye bread substitute if you have a gluten allergy. Like rye bread, it can be used for anything regular bread is used for.

Multi-grain bread is made from various grains, unlike rye bread which is made from just one or two grains. Some examples of the grains it could contain include wheat, barley, flax, and oats. With a brown appearance, it tends to have an earthy taste. But the intensity of this earthiness depends on the types of grain in it.

It has a dense texture and a slightly sweet taste after-taste. Subject on the grains used, it’s typically soft with a moist texture. Being a multi-grain bread doesn’t mean it was made from whole grains, so read the label to be entirely sure. It can be used to make any type of sandwich. Sour toppings like pickles or mustard are an excellent balance for its sweet, earthy flavor.

Rye bread is one of the most nutritious breads and a healthier option if you want to improve your diet. The rye bread substitutes listed above are the best alternatives for this healthful. They may not have the exact texture or flavor, but they work just as well.