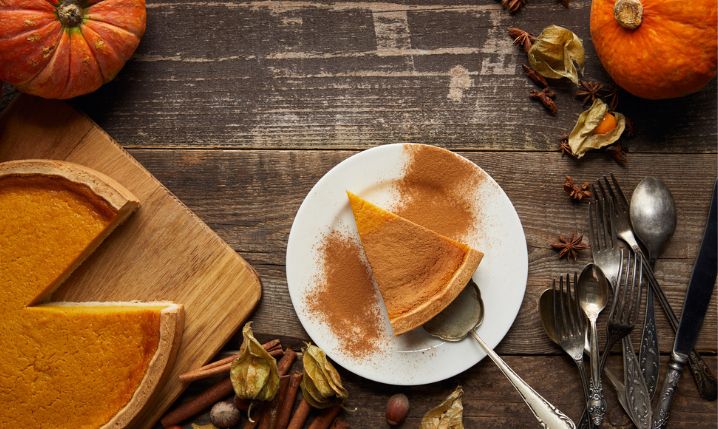 Pumpkin Pie Spice is a combination of spices initially designed for use in the making of pumpkin pie. While it originated in the US, this spice is popular worldwide today. There are plenty of options if you need a pumpkin pie spice substitute. Read on to find out some of the best.

What is Pumpkin Pie Spice?

Pumpkin pie spice is a spice blend made popular in America in the early 1930s. The mixture includes cinnamon, ginger, nutmeg, cloves, and allspice. And it’s readily available in most grocery stores. The spice mix has a warm, sweet flavor synonymous with fall dishes, pumpkin pie in particular.

In the past, pumpkin pie spice was used primarily in pies and other desserts. However, it is now used in a wide variety of sweet and savory dishes. Roasted vegetables, soups, stews, and more benefit greatly when adding pumpkin pie spice.

Finding a suitable alternative for pumpkin pie spice when you’re in a bind is much easier than you think. The blend itself is not that difficult to replicate, and several options can be adapted to suit your taste.

Making your own pumpkin pie spice is easy and economical. The traditional blend includes 2 parts cinnamon, ginger, and allspice, and 1 part cloves and nutmeg. But you can adjust the proportions or add other spices to suit your taste.

For example, if you prefer a more intense flavor, you might increase the ginger or add a pinch of black pepper. Or, if you want a sweeter spice mix, you could add a teaspoon of ground cardamom.

Simply combine all the ingredients in a bowl and store them in an airtight container. Use it to flavor everything from coffee and oatmeal to pies and stews.

Despite their different origins, they are commonly used in sweet and savory dishes. And when blended together, they make an excellent substitute for pumpkin pie spice.

The resulting blend has a rich, warm flavor with hints of sweetness and spice. It can flavor various dishes, from roasted vegetables to pies and cakes.

Cloves are the unopened flower buds of the Eugenia caryophyllus tree, native to Indonesia. They have a strong, pungent aroma and a bitter taste.

Allspice is a spice derived from the dried berries of the Pimenta dioica plant. A blend of ground cinnamon, nutmeg, and allspice offers an almost identical flavor and texture to pumpkin pie spice.

That said, this particular blend of spices will be slightly sweeter than pumpkin pie spice. However, the ground cinnamon, nutmeg, and allspice combination can act as a substitute in almost any dish.

Cinnamon alone can make a great substitute, as it’s actually the key ingredient in pumpkin pie spice. Cinnamon has a warm, rich flavor and can help to add depth and dimension to dishes that might otherwise be one-note.

As for texture, ground cinnamon is more finely ground than pumpkin pie spice. Cinnamon works best in dishes showcasing its flavors, such as pies, cookies, and bread. When used judiciously, cinnamon can provide all the pumpkin pie spice flavor without the fuss.