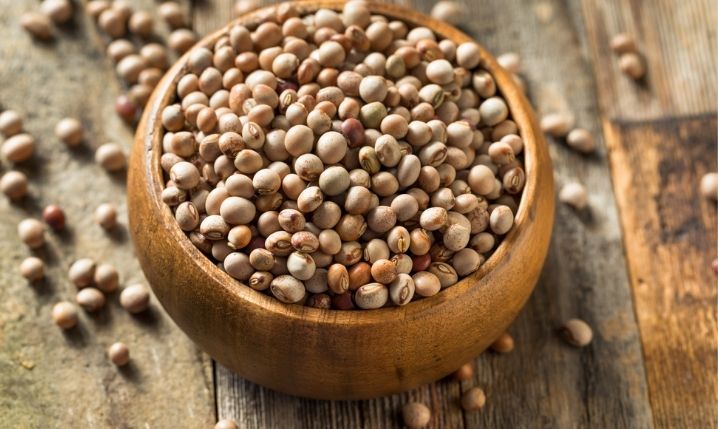 Pigeon Peas are widely used as food around the world. So much so that they are also known as the Congo Pea, Angola Pea, and Red Gram. Known to have been cultivated for over 3,500 years the pigeon pea is used for making rice and peas, sambar, and various other stews and curries. Read on to find out the best pigeon peas substitute for any situation!

What Are Pigeon Peas?

Pigeon peas are a type of legume and are technically a bean. These delicious peas are used in many different recipes as they can be simmered, steamed, or fried. They are also sometimes used to create flour.

They are most commonly found in Asian, African, and South American cuisine. Popular in curries, soups, and similar recipes they can more tricky to find in other areas of the world.

There are two types of pigeon pea:

Dried pigeon peas are brown in appearance with hints of red. They work excellently in curries, stews, and soups as they tend to break down during cooking which makes them an excellent thickener.

Green pigeon peas are often used in salads and rice dishes and maintain their shape during the cooking process.

The main difference between the two is when they are harvested. Once harvested they are then sold as either a dried or green pigeon pea.

Black-Eyed Peas are a popular substitution for pigeon peas in the United States. They are widely available and work well as a substitute in rice dishes.

Commonly used in African, Caribbean, and some South American cuisine, the black-eyed pea works well with the flavors of those areas. So it can work for stews, soups, tagines, and similar.

Similarly to pigeon peas, the black-eyed pea has an earthy taste and also offers a dense creamy consistency when cooked well.

Sometimes known as butter beans, the lima bean is a suitable replacement for pigeon peas. They too have an earthy flavor with a creaminess to the texture when cooked.

You can use lima beans in rice dishes such as chili. They also work well with curries, but ideally, you’d pick the black-eyed pea for any curries from some of the areas mentioned above.

Pinto beans are a widely available substitute and work well in many cuisines from Mexican to Indian. They have a nuttiness to the flavor which makes them a good substitution in terms of taste.

Despite the fact that they are similar in size and appearance to pigeon peas, the texture isn’t always quite the same and they’re not as good at thickening up a dish if that’s something you’re looking to do.

You can use fava beans as a substitute for pigeon peas when you want them to hold up in a dish. This means that they are well-suited to longer cooking times and are therefore ideal for rice dishes.

You should avoid using fava beans in place of pigeon peas in stews or any dish where you’re wanting the pigeon pea to add texture and consistency when cooked down and thickened.

Also known as Boston Beans, you can use Navy Beans in soups and stews. They don’t have a strong flavor compared to many beans, but that makes them an ideal substitute for pigeon peas in some situations.

These can work well in stews, soups, and even some curries where you want them to add texture, but not affect the natural flavors of the dish.

Garbanzo Beans, or chickpeas, are another great option when it comes to replacements for pigeon peas.

They work well in curries, soups, and stews because when slow-cooked they can become intensely creamy.

They have a nutty, earthy flavor that is similar to pigeon peas and pinto beans. When undercooked they can sometimes taste a little bitter. So that’s something worth keeping in mind.

There are a lot of suitable beans that you can substitute for pigeon peas, as remember, they are a bean as well. Whether it’s a curry or a stew there’s always a bean that’s up to the task. You should be able to find one on the list that you can use in any situation.