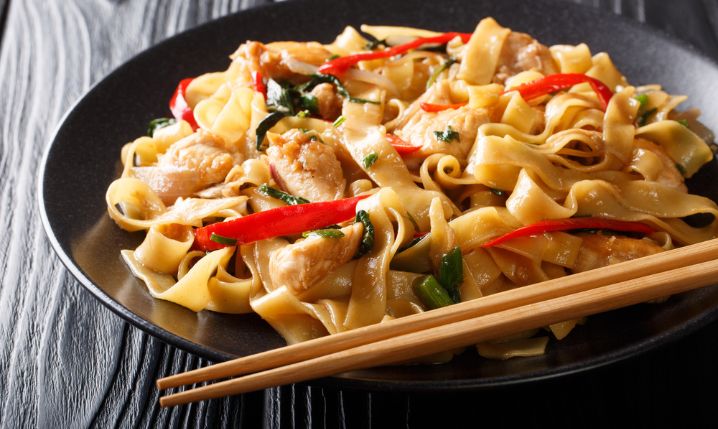 The tastes of Thai food are inspired by flavors from all over the world. This cuisine’s herbs and spices are out of this world, resulting in a delectable feast.

It’s hard to talk about Thai food without mentioning Pad Thai and Drunken Noodles. They are, after all, two of the most popular Thai noodle dishes in the world.

Yet even experts find it difficult to differentiate between Pad Thai vs. Drunken Noodles.

What are Pad Thai Noodles?

The word “pad” translates to “fried” in English. As such, Pad Thai noodles are Thai cuisine’s quintessential stir-fried rice noodles.

The Pad Thai noodle dish often combines ingredients like tofu, peanuts, scrambled eggs, shredded chicken, or bean sprouts. But other meats and stir-fried vegetables can be incorporated too.

All the components are sautéed together in a wok. And Pad Thai sauce is often added for a unique sweet and salty flavor. The result is a soft but slightly chewy noodle delight.

What are Drunken Noodles?

Drunken Noodles, like Pad Thai noodles, are a typical form of street food in Thailand and worldwide.

Soft, sticky, wide rice noodles are used in the stir-fry dish called “Drunken Noodles”. The rest of the ingredients, on the other hand, may vary slightly.

The sauces typically include fish, soy, garlic, and oyster sauce. Meat, seafood, tofu, and a variety of vegetables are most often included.

Spicy black pepper, chili, and holy basil make an appearance in the recipe for the Drunken Noodles dish.

To create Pad Thai’s subtle sweetness, tamarind sauce is combined with fish sauce and palm sugar. Once the protein ingredient is mixed in the sauce, it’s served over a bed of rice noodles and vegetables.

Instead of a savory sauce, Drunken Noodles are served as a stir-fry. This dish combines soy sauce, fish sauce, and oyster sauce, which is then drizzled over a mountain of veggies and fresh wide rice noodles.

Drunken Noodles’ flavor profile differs significantly from that of the Pad Thai noodle dish. Both of these meals are relatively sweet compared to other Thai dishes, but their flavors are very distinct.

For starters, umami and nutty flavors abound in Pad Thai. The crunchy peanuts and tangy tamarind paste are brought out by mixing them into the sauce.

Drunken Noodles, on the other hand, are far more potent. Unlike Pad Thai, its savory sauce always includes Thai basil, which lends a spicier flavor to the sauce.

Now you know the difference between Pad Thai vs. Drunken Noodles. Most Thai restaurants provide some variation of each. Both are great options if you appreciate spicy and sweet flavors.