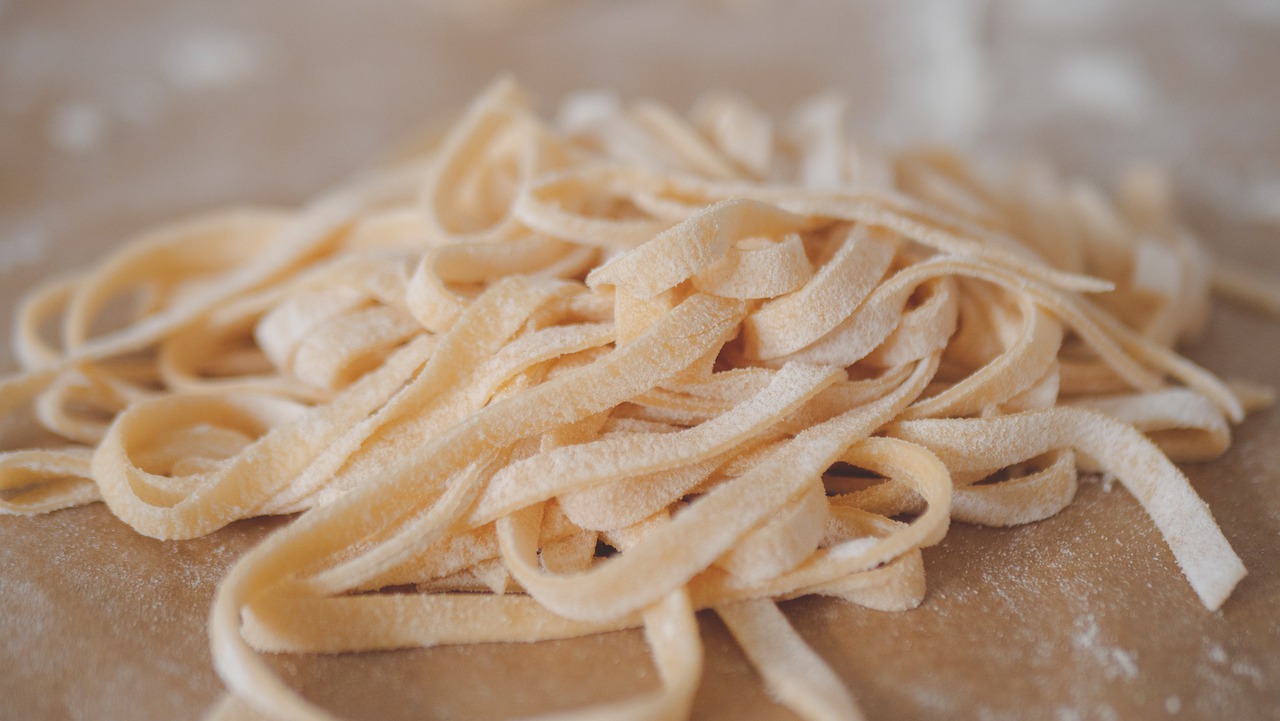 Originating in Italy, fettuccine is a popular pasta in Roman and Tuscan cuisine. It is a thick, flat, wide noodle made of flour and egg. Long, flat ribbons of pasta of about ¼ inches in width are cut out from rolled-out dough, lending its name “little ribbons”. It has a cooking time of about 9 to 12 minutes, making it easy to prepare.

Fettuccine is the go-to pasta for alfredo sauce dishes. And it’s also typically eaten with meat sauces like sugo di umido and ragu di pollo, creamy sauces, or tomato-based sauces. Fettuccine can be made fresh for more traditional dishes or can be dried like those bought in stores. And this pasta is very popular in cuisine around the globe.

Sometimes we run out of fettuccine at home, or we want to try a different pasta for a recipe. Are there alternatives that would provide the same thickness and consistency for our favorite sauces? This blog post highlights six similar fettuccine substitutes that would work amazingly for your dish.

Pappardelle is a large, flat, long pasta originating from Tuscany, Italy. It is typically about ¾- 1 inch wide (almost twice as wide as fettuccine) and is made from flour and eggs. Falling under the category of ribbon pasta, it has a rough texture that makes it great for sauces. They are typically consumed during the winter months because they are eaten with heavier sauces.

This pasta is the best substitute for fettuccine with its similar thickness, length, and texture. Although pappardelle may be more in width, it is similar in rich egg pasta consistency. It is also ribbon-like and looks quite similar to fettuccine.

Spaghetti is a cylindrical, long thin solid pasta originating from Italy. It is the most popular of all pasta varieties and is available worldwide. Many regard it as the staple food of Italian cuisine. Made from durum wheat semolina or flour and water, this long pasta is frequently served with tomato sauces.

While spaghetti does not come in the same ribbon shape as fettuccine, the strand pasta is suitable for many recipes. They are also readily available and can be easily found in supermarkets. Despite the slight differences in their make and sizes, spaghetti is an excellent substitute for fettuccine.

Tagliatelle is also a long-ribboned pasta quite similar to fettuccine. It is pretty popular in Italian cuisine and is mainly eaten in dishes peculiar to Italy. Originating in the regions of Marche and Emilia-Romagna in Italy, tagliatelle is served with a variety of meat sauces.

Although it is wider than fettuccine, tagliatelle can easily replace it in most recipes. They both have similar thickness and pair with chunky sauces. It is also an egg pasta similar to fettuccine.

Bucatini, also known as perciatelli, is a thick, long tubular pasta. It is prevalent in the region of Lazio, especially in Rome. They are made of durum wheat flour and water and are typically 10-12 inches long. It is typically served with light buttery sauces, pancetta, eggs, or sardine and traditionally served with guanciale. The standard cooking time for “little holes” pasta is 10-14 minutes.

Linguine is a long, narrow, thick ribbon pasta. It is made from flour and egg and is 4 millimeters wide (narrower than fettuccine). Linguine originated in Italy and pairs well with thin or light sauces like tomato or fish-based sauces.

Although linguine is a more delicate pasta, it can comfortably replace fettuccine in many recipes. It is wider than spaghetti and slimmer than fettuccine. Linguine is also similar in texture to fettuccine, even if they look different.

Related: Linguine vs Fettuccine – Differences you need to know

Taglierini is a ribbon-shaped variety of pasta almost as long as spaghetti. It is a traditional egg dough recipe from the regions of Molise and Piedmont in Italy. Taglierini pairs well with light sauces and seafood and can be used in Italian cuisine. Cooking time is about 6-9 minutes making it easy to cook.

Because of the similarities in shape and ingredients, taglierini is a perfect alternative for fettuccine in recipes. It also has a thick consistency that is great for sauces.

This article has listed similar pasta noodles that can seamlessly replace fettuccine in recipes. They possess similar textures, ingredients, shapes, and sizes, so fettuccine won’t be too sorely missed in your dish.