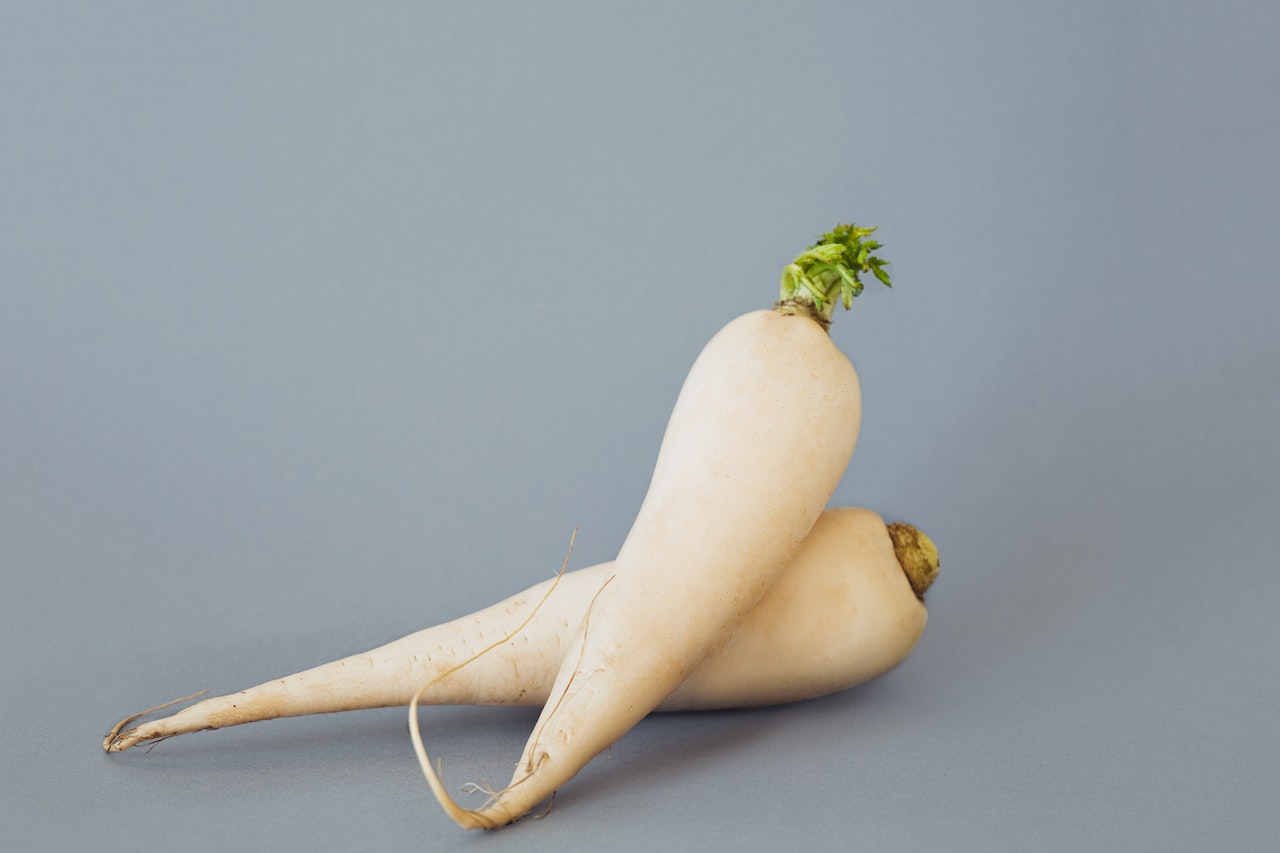 Japanese for big root, Daikon is a winter radish distinguished by a long white napiform root. Originally native to continental east Asia, Daikon radish is also known as white, Japanese, or Chinese radish and is popular in Asian cuisine.

Looking like a plump white carrot, raw Daikon radish has a sweet, lightly spicy flavor. Some species have an even stronger flavor. The flesh is crisp and fresh but becomes tender and juicy when cooked. The green leaves of Daikon radish are pungent with a peppery taste that mellows when cooked.

Daikon is mostly water and low in calories but is packed with plenty of nutrients. The roots can be used to make pickles, served raw in salads, used in meals, or as a garnish. Daikon leaves are eaten either raw or in sauces or soups.

It’s possible to store Daikon radish roots for an extended period. They must, however, stored in a cool, dry place without their leaves in order to last a few weeks. That said, Daikon radish is usually found in supermarkets or grocery stores in areas with a large Japanese or Chinese population. And it’s primarily found in season during winter.

If your recipe requires Daikon radish, but it is out of season, or you can’t find it in your local grocery store, don’t fret. Read on to learn about five excellent Daikon radish substitutes.

Horseradish is also a root vegetable. And it’s notorious for its intense and overpowering flavor and smell. Like Daikon radish, it has a long white root and green leaves. This root vegetable is an excellent Daikon radish substitute with similar tastes and flavors.

You’re most likely to find horseradish as a bottled preserve which many use as a condiment. But horseradish is also used in sauces and dressings for salads. It adds a spicy kick to whatever food it’s used in. Consumed in small amounts, horseradish contains few calories and loads of nutrients. It possesses healthy compounds that protect against multiple illnesses, including cancer.

White turnips are an excellent substitute for Daikon radish. Similar to Daikon in shape, this root vegetable is less spicy and a bit sweeter. This superfood is sometimes eaten raw. And, when cooked, it’s inherent bitter taste mellows. White turnip leaves are also a favorite in salads.

They are usually available in winter and not all year round. Therefore, white turnips will only be a great substitute when available. White turnips are versatile vegetables that can be braised, roasted, or sauteed. These super veggies are low in calories and high in nutrients.

Parsnip is another root vegetable that has a great deal in common with carrots. It has a long taproot, just like Daikon radish. Sweet in flavor, this root vegetable has cream-colored skin and flesh. It has a harder texture than carrot and deeper complex flavors.

Native to the Mediterranean, parsnip has a sweet flavor that resembles carrots. It is rich in antioxidants, vitamins, and minerals. One would typically roast or bake parsnips. But it is possible to eat it uncooked. That said, anything you can do with a potato, you can do with a parsnip. And it leaves a subtle flavor in whatever dish it was added to.

Jicama is also known as Mexican turnip. The edible part of the plant called jicama is its tuberous roots. It has a yellow papery exterior and a creamy white interior. With its sweet, starchy flavor, it resembles a raw potato. The crunchy texture is harder than Daikon radishes but works well as a substitute.

Water makes up 80% to 90% of tuberous roots like these. And it is typically eaten raw. It can be used in soups, stews, and even stir-fried dishes. And it’s very rich in fiber and low in sugars and calories. That said, jicama is harder to find than Daikon radish. So, it may not always be available as a Daikon radish substitute.

If you don’t like the strong Daikon flavor, try cabbage instead. Cabbage is a popular leafy green with dense-leaved heads. The leaves are crunchy and taste a bit bitter, but it works well in salads, soups, and stews. It adds a sweet grassy flavor to the dishes it is added to.

Despite its blander taste, cabbage works well as a Daikon radish substitute. It is available all year round and can be eaten raw or cooked. Cabbage is also very versatile as it can be juiced, braised, stir-fried, and grilled.

Daikon radish is a fantastic root vegetable with strong flavors and a pungent aroma. But it isn’t always available. So, when you need an excellent Daikon radish substitute, look no further than our above-listed options to dazzle your guests.