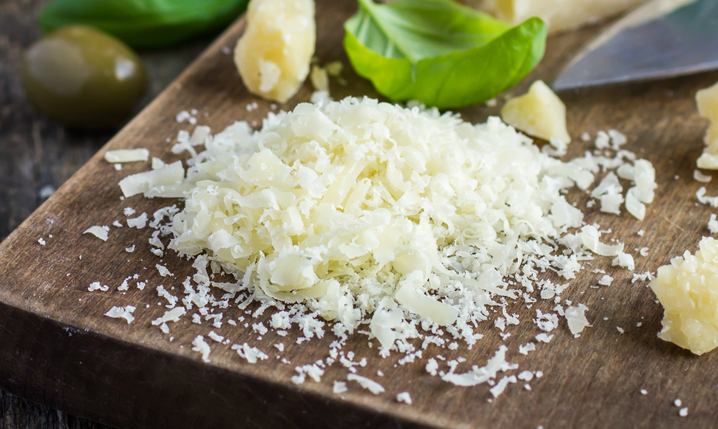 Cotija cheese is a Mexican semi-hard cheese from the town of Cotija in the State of Michoacan. In this article, we’ll explore what makes a good cotija cheese substitute and which option will be suitable for different situations.

A Cow’s milk-formed cheese; Cotija tastes robust, strong, and salty. It comes from the Parmesan cheese family, and you can use it for grating over tacos, salads, and more. These are important facts when selecting a substitute.

If you don’t have access to cotija for any reason, there are several excellent cheeses you can use as an alternative in any situation.

Because Cotija Cheese is known as the “Mexican Parmesan,” it makes sense that Parmesan would make one of the most suitable replacements.

Parmesan is a hard cheese you use to grate over Italian foods like spaghetti. The strength of flavor and saltiness is similar, making it a suitable replacement for chili dishes, tacos, etc.

Parmesan is readily available in most stores and is inexpensive, which also adds to the list of reasons why this is the best cotija alternative.

Romano is another Italian cheese you can use to substitute for Parmesan and other hard cheeses. With a tangier flavor to Parmesan, it makes an excellent option for chilis, soups, and similar recipes that call for Cotija cheese because of its rich flavor.

Romano is versatile and has been around since the days of the Roman Empire, a multi-cultural civilization with a wide range of foods. They will have used Romano for dozens of recipes. So you can easily use Pecorino Romano as a substitute for Cotija Cheese in any recipe and know it’ll still taste amazing.

Feta is a delicious, creamy substitute for Cotija cheese in salads and even tacos or fajitas. This cheese is both mild and robust in flavor, with the tangy flavors offering the most assertive flavor notes. Feta comes from goat’s milk, and even though it is crumbly, it is not a hard cheese. Therefore you should not choose it for recipes that specifically require a hard cheese.

If Cotija is a Mexican Parmesan, then Reggianato is an Argentinian one. Inspired by other cheese’s on this list, you can feel safe to use Reggianato for Cotija in any scenario where you would use Parmesan and similar. However, the flavor of Reggianato is not as intense as Cotija which means you might want to add more than the recipe calls for you to use.

Asiago is last on this list as a replacement for Cotija because it doesn’t have the best flavor as a different option for Cotija. Instead, you can use it for salads where you do not want such intense flavors overpowering the delicate and varied tastes of your vegetables/fruits.

If a mild flavor for your salad doesn’t sound as good to you, you can try the Feta cheese option above, but know that it will introduce a different texture, whereas Asiago is more accurate to Cotija Cheese.

When you are looking for a cotija cheese substitute there are lots of alternatives from all over the world. Some of the above cheeses will work as a substitute in almost any situation and you’re guaranteed to find at least one of them in the grocery store!