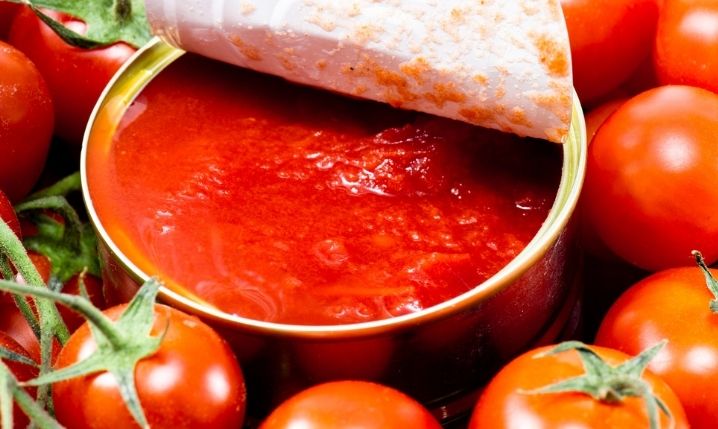 Canned tomatoes are a staple of many kitchens. You will often find them called for in dozens of dishes, and you will use them as an ingredient in more recipes than you could count. However, there are many times when you need a canned tomato substitute. In this article, we’re exploring all the scenarios and options.

With many varieties of canned tomatoes, you need to pay attention to the type of tomato and its preparation. You should also keep in mind the food you are cooking.

Let’s look at all the alternatives and replacement options.

What Are Canned Tomatoes?

Canned tomatoes come in numerous forms, including diced, crushed, plum, paste, or sauce. The can itself helps preserve the tomatoes for longer in a method known as canning. In addition, they are relatively inexpensive and widely available in grocery stores allowing you to save time on preparation and usage.

Canned Tomato Substitutes For Every Situation:

Substitute For Canned Tomatoes in Soup

Most soups use canned tomato sauce or canned crushed tomatoes. You can use one or the other. However, if neither is available, you can use canned plum tomatoes or diced tomatoes instead.

To use plum tomatoes or diced tomatoes for soup, you can crush them with a potato masher or similar kitchen utensil and then strain the skins out with the sauce going into a bowl or pan.

Substitute For Canned Tomatoes in Chili

Most chili recipes will call on canned plum tomatoes, crushed tomatoes, or diced tomatoes. As before, you can use any of these in place of one another for chili.

Another good substitution option would be something like passata or tomato paste. You can add a little water to tomato paste to achieve a suitable viscosity for the sauce. Neither of these options will give the same texture as you would get with canned tomatoes that contain actual tomatoes, but the consistency can be similar, as can the flavor itself.

There are a few suitable substitutes for canned tomato sauce. You can use either passata, tomato puree, or tomato paste.

Passata is more of a liquid and is often the best option. You can add sugar and salt to avoid bitterness compared to regular canned tomato sauce.

With puree and paste, you might want to add a little water alongside each to create a mixture with the consistency that will be suitable for the recipe you are using.

One of the most common canned tomatoes you will find is the diced variety. However, the premium options are usually made with plum tomatoes because they offer the best flavor for general cooking.

This fact means that the best substitute for diced canned tomatoes will be regular canned plum tomatoes. You can then use something as simple as a knife and fork to cut the large plum tomatoes into smaller sections that will help resemble the texture of diced tomatoes.

Another option is canned crushed tomatoes which won’t offer the same texture but often provide the same general taste and flavor.

Canned Crushed Tomatoes are usually the same as diced or plum tomatoes but are crushed versions of the same thing. This means that you can replace canned crushed tomatoes with either of the above types of canned tomato. Just decant them from the can into a mixing bowl or pan and crush them yourself to get the same result.

When it comes to substitutes for canned tomatoes, there have to be a lot of good home cooks thinking about plum tomatoes in particular. Plum tomatoes are among the richest tasting tomatoes, offering a flavor that makes them perfect for dishes like marinara sauce, chili, pizza sauce, and almost everything else too.

You can use canned diced tomatoes or canned crushed tomatoes in place of the canned plum tomato. Check the labels on the back and look for anything that says the tomatoes inside are San Marzano or Roma Tomatoes. These are both forms of plummed tomatoes and will ensure that these replacement options offer the same flavor, even if not the same whole tomato texture.

The best substitute for canned tomatoes will depend on which canned tomatoes you require and the recipe itself. Fortunately, there is always a simple substitution option no matter what situation you’re in.