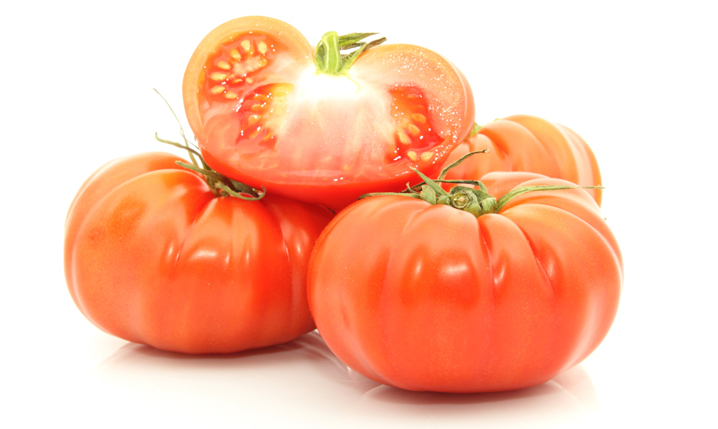 Beefsteak tomatoes are a large tomato variety characterized by meaty flesh, with fewer seeds and less juice than other tomatoes.

With less than regular shapes for tomatoes, the beefsteak varieties such as the Brandywine and Black Krim get less attention than they deserve. However, the beefsteak tomato remains one of the best varieties available for many recipes, offering an intense aroma and solid tomatoey taste.

These fleshier tomatoes are known for their size and the vast number of types, with an estimated 350+ beefsteak tomato types in both heirloom and hybrid varieties.

Many recipes and dishes will require beefsteak tomatoes. So what do you do when you don’t have any on hand? Are there any good alternatives?

Check out these substitute options for beefsteak tomatoes.

Plum tomatoes are one of the tastiest varieties for cooking with a nice fleshy texture, making them a top choice to replace beefsteak tomatoes in any recipe that calls for making delicious soups and sauces.

When bought fresh, you can use plum tomatoes as a beefsteak tomato alternative in dishes like burgers, paninis, and other sandwiches.

It would be best if you only used canned plum tomatoes as an alternative in cooked dishes.

Heirloom tomatoes can also be considered the original tomatoes with a distinct appearance and dozens upon dozens of cultivars. With exciting colors and odd shapes, heirloom tomatoes are often more similar to beefsteak tomatoes in size and overall taste.

Note: Some beefsteak tomatoes are, in fact, heirloom tomatoes themselves.

With so many cultivars of heirloom tomatoes, such as The Hillbilly, Mortgage Lifter, and San Marzano – heirlooms come in all shapes and sizes, from plum to beefsteak and everything in between.

Like beefsteaks, most heirloom tomatoes will often have robust and complicated flavors that vary from sweet to earthy and fragrant. If you can get your hands on some lovely heirlooms, they always make for a memorable dish.

Campari Tomatoes are fantastic for antipasto dishes like Bruschetta and, in many cases, make a better option for beefsteak tomatoes in such food recipes. You can also substitute Campari tomatoes for beefsteak varieties in burgers, especially if you’re looking for some extra sweetness.

Campari tomatoes have the appearance of most commercial tomatoes where they’re round and medium-sized, but they offer an intense sweetness and a decent amount of juiciness. These characteristics make them dissimilar to beefsteak tomatoes which are bigger with fleshier fruit and contain fewer seeds.

Out of all the tomatoes on this list, you’ll find that campari tomatoes are the best all-around substitute. The reason is that they are both more widely available and lend themselves to most recipes. However, the texture of these tomatoes is often the least similar. This does affect the overall taste of your dish when the fleshiness of the beefsteak is supposed to be more prominent. With that being said? The campari is humble and versatile and will still be the best solution in most cases.

This list gives just three top subs for beefsteak tomatoes, but that’s because these three types of tomato will cover 98% of use cases in the kitchen. With the plum tomato and its deep flavors and meaty flesh that lends itself so well to sauces, the heirloom varieties often give the size and robust flavors, and finally, the super versatile campari. Whatever your needs, one of these should cover you in a pinch.