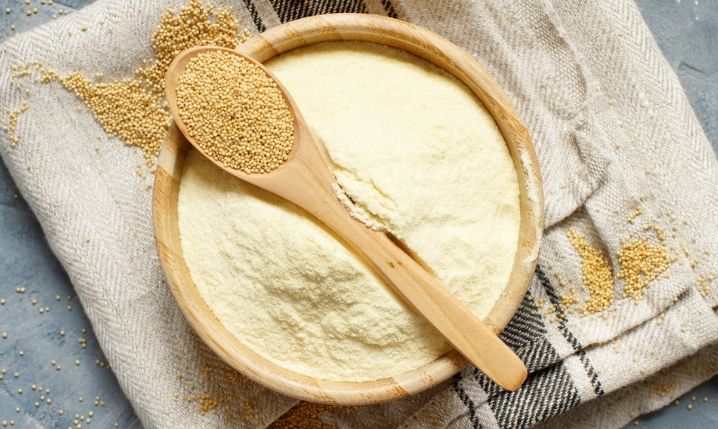 Amaranth Flour is made from the grains of a plant species in the genus Amaranthus. The grains of these plants have been cultivated for over 8,000 years.

Historically used by the Aztecs, amaranth was a staple grain crop used for tamales, tortillas, and other foods you might now associate with modern-day Mexico.

Amaranth Flour itself is a high-protein flour used for making certain flatbreads like tortillas and as a thickener in sauces, gravies, stews, and soups.

If you find yourself looking for an amaranth flour substitute, then check out some of these options for different scenarios.

All-Purpose Flour, also known as Wheat Flour, is an ideal substitute for amaranth flour if you’re looking to make regular bread or do some baking.

Amaranth Flour doesn’t rise quite the same because it lacks specific proteins found in wheat. So in some instances, you’d find all-purpose flour to be a superior alternative from the get-go.

Quinoa Flour is another gluten-free flour like Amaranth. They are both also native to South America, specifically the Andes Mountains.

One downside to this option is that it does have a different taste compared to amaranth flour’s more nutty earthy flavors. The flavor of quinoa flour is more grassy and can even taste a little bitter. So it is best used when making tortillas as opposed to something like a stew.

The cereal grains from Sorghum that are refined into Sorghum Flour can be traced back around 5,000 years to Africa. Similar to Amaranth it is also gluten-free.

Sorghum Flour is most often used in combination with other flours for baking foods like pancakes, muffins, and sometimes bread. In addition, it makes a suitable replacement for amaranth flour in gravies, stews, and other liquid-based recipes where you need flour to act as a thickening agent.

You can substitute these two flours with a 1:1 ratio.

Barley Flour tastes similar to amaranth flour with malt flavors and a hint of earthy nuttiness. However, barley isn’t gluten-free, which might not be suitable for everyone reading this list.

Another good reason you should consider barley flour is that it is widely available and inexpensive.

Not to be confused with Soya Flour, Soy Flour is made by grinding whole soybeans into fine flour.

Like amaranth, soy is gluten-free. Therefore, you can use soy flour as a thickening agent or add it to other flour mixtures for baked goods.

One thing to keep in mind is texture and flavor. Soy Flour is notoriously fine, but it also has a more beany taste. On the other hand, you should consider roasted soybean flour as it has a more nutty flavor, making it a more suitable sub for amaranth flour.

There are several good flours on this list that you can use as an alternative to amaranth flour in almost any situation. Fortunately, amaranth flour is used for a limited number of uses which gives you many simple options to choose from when it comes to the best substitute.