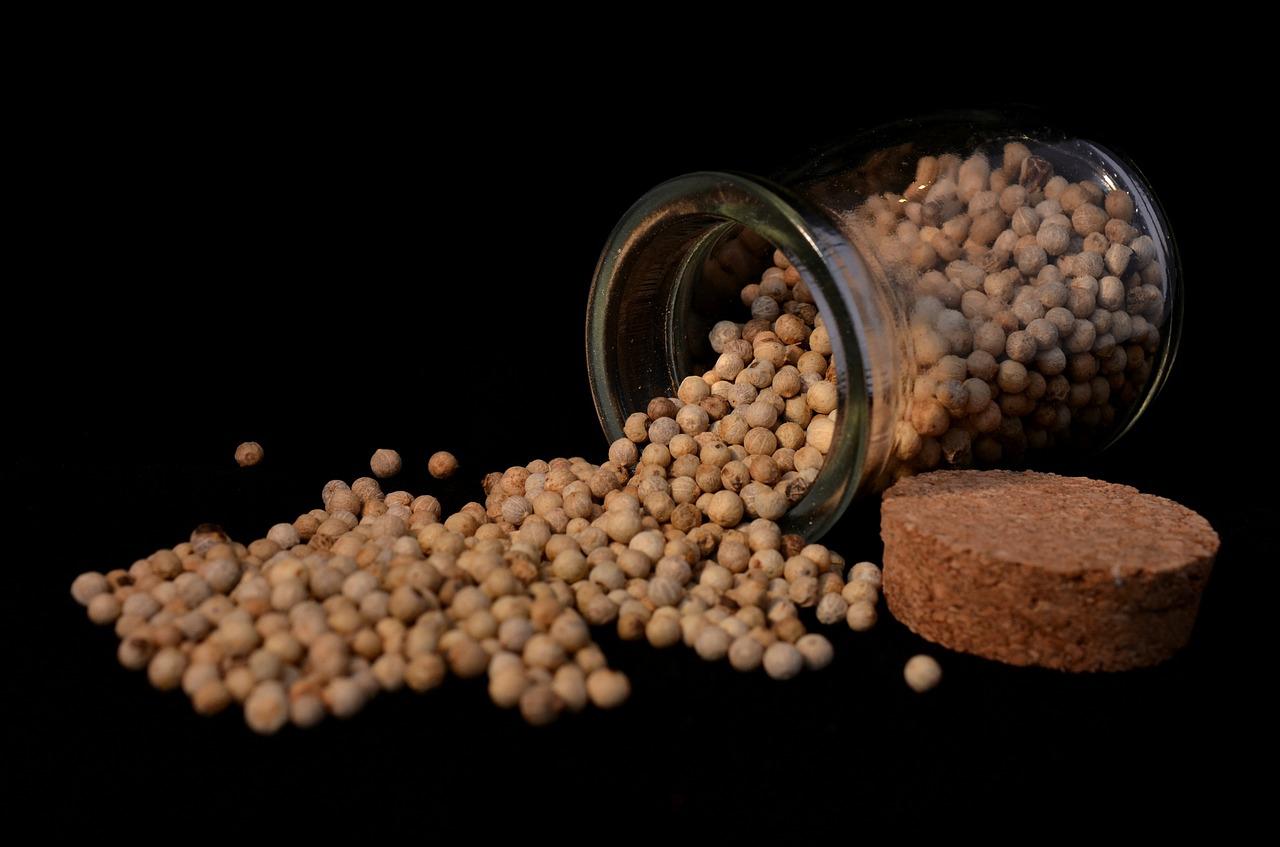 White pepper is a spice produced from the dried part of the pepper plant. This is the same plant from which black pepper is derived, and it’s native to the Southern part of India. There are various white pepper substitutes that you can use, no matter the dish you’re preparing.

After the fruit from the pepper plant is dried, the outer husk is removed when making white pepper. This seasoning has a sharp bite and a slightly spicier taste than black pepper. And it’s typically used in ground form in French and Asian cuisines.

In this article, we’ll learn more about different spices you can use to replace white pepper.

What is White Pepper?

White pepper is produced predominantly in India, Indonesia, Malaysia, and Brazil. While it’s typically hotter than black pepper, the degree of heat depends on where it’s produced.

The processing of white pepper is done after the pepper plant berries are ripe. After the outer layer is removed, the remaining seeds are processed and dried to make white peppercorns.

In French and Asian cooking, white pepper is most often preferred and can be used whole, freshly ground, or finely ground. It has an earthy and more uniform hot character that hits right at the back of the throat.

Traditionally, white pepper was used for alleviating minor headaches. And it’s also been used to counteract tooth decay and get relief from severe toothaches.

We have some easy alternatives for you if you find yourself in a pinch without white pepper on hand. Finding a suitable replacement is also not a big issue as it has various options for every situation. Many of our substitutes for white pepper will deliver a similar heat and flavor profile.

Since black pepper comes from the same plant, it’s one the best substitutions for you, as long as you have no problem with its sharpness. But black pepper is the safest bet as it offers almost the same taste and aroma.

Black pepper is among the most versatile spices used in almost any dish. But it’s best used in stews, sauces, soups, salsas, and many meat and vegetable dishes.

White pepper is used by cooks for making cream or white sauce-based dishes. Black pepper can also be used for these if you don’t mind black spots in your white sauce.

Although brighter in color, pink pepper can be another ideal pick when finding a substitute for white pepper. You can easily blend pink pepper into a dish with a color difference that is not as noticeable as you might think.

Pink pepper has a fresh, spicy floral note with a hint of rose and a slightly herbal flavor. It can also have a sweetness to it. Replacing white pepper with pink pepper will not change your dish’s taste, heat, or aroma.

However, finding pink pepper can be difficult as it is unavailable in some regions. You’ll need to look for a specialty spice shop in such cases.

Since the taste and aroma aren’t overpowering, it is perfect to use for soups, stews, and stir-fries. And, like black pepper, ground ginger can also be used for making baked or sweet items. These include gingerbread, ginger ale, pumpkin pie, pound cakes, etc.

Note that those taking prescribed blood thinners should use ground ginger sparingly, as it also slows down the clotting process.

Like ground ginger, ground mustard also adds hints of yellow to the meal and is another excellent substitute for white pepper.

Ground mustard provides a mild heat and spice effect that your dish needs. Also, due to its mild flavor profile, it will be difficult for guests to detect any taste difference.

Ground mustard works well in pasta, mashed potatoes, butter, eggs, salad dressings, etc. The best part is that it has an incredibly long shelf life. However, the potency of the mustard reduces slightly over a long period.

When trying to step up your spice game, paprika can be the best substitute for white pepper. You can use it to make different stews, soups, sausages, and barbeque rubs.

The mild kick of heat in white pepper doesn’t hurt anyone. Therefore, if you plan to venture into spicy foods, paprika can be a suitable option. However, the spiciness of the paprika depends on its origin.

Unlike the white pepper, adding the paprika powder to your dish adds a hue of red to the dish. Consumption of paprika in excess can also have an adverse effects, such as stomach irritation.

Since ground cayenne pepper is a diverse spice, you can use it with many different dishes like stews or stir-fried dishes. The pepper has a Scoville rating of 30,000 to 50,000 heat units, making it a medium-hot chili.

Cayenne pepper is an excellent source of antioxidants and other plant-based compounds that promote good health.

White pepper is one of the most common seasoning spices. Yet it is always possible to run out of it in your kitchen. The good news is that finding a white pepper substitute is easy with our above list of alternatives. Some may already be stored in your pantry, and any would make a perfect additive no matter the meal.