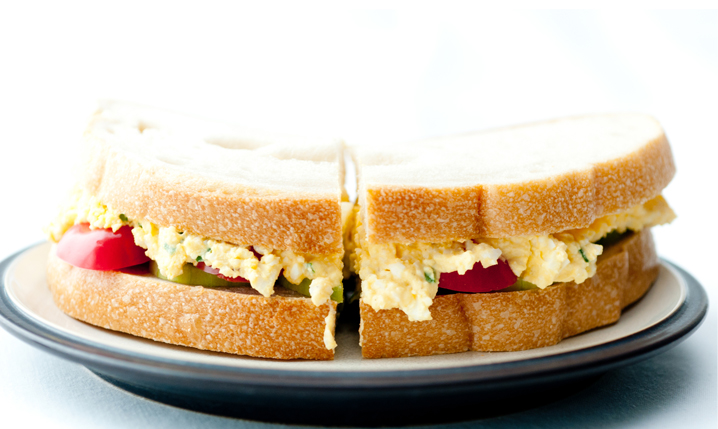 Egg salad sandwiches are one of my favorite sandwiches of all time. You can eat them for lunch, for picnics, or even for a bit of a treat.

Most of the time, people eat these sandwiches as a standalone thing without any side dishes. The problem is that sometimes they aren’t quite enough on their own, and you want to serve something else with your egg salad sandwich to help fill you up.

So what should you or can you serve with egg salad sandwiches?

Potato chips are the king of sides when it comes to rustling up something to serve with an egg salad sandwich.

You can go with cheese and onion, salted, salt and vinegar, or something else. The old traditional crisps such as the ones above are what most would recommend as the flavors won’t interfere with the flavors of the egg. However? Pick what you like and enjoy!

There are many salads to choose from, and you won’t want to go heavy on the salad when eating a sandwich.

For this reason, it can be a good idea to go for a fusion salad that contains other foods such as an egg salad, a Waldorf salad, or a caesar salad with crispy dried bacon crumbled over the top.

Now we are getting into the picnic selection, but that’s fine because even if you’re not going for a picnic, these foods work fine with an egg salad sandwich. Some of the next picks might even remind you of buffet food.

Go for a quiche lorraine and serve this alongside your sandwiches so everyone can grab what they like.

Serve up some mini sausage rolls as something with a bit of extra bite and a little meatiness to your selection. If you want to go all out, always go homemade with sausage rolls to get the absolute best flavors and textures.

If sausage rolls aren’t your thing, then you can substitute them with pork pies to serve as another selection to have with a sandwich.

Some gala pork pies come with an egg in the middle, and you can then cut them into small thin slices. Alternatively, you can opt for mini pork pies, which are small and round.

Falafels are little balls made from chickpeas and spices, and they are delicious. They add a different dimension to egg salad sandwiches, and yet the flavors go well together. You can serve these as a standalone with some potato chips, or you can mix them as part of a buffet or picnic selection.

If you can get your hands on some real cheddar cheese and grate it up you can put these in sandwiches and serve a sandwich platter. If this sounds good to you, you might even want to liven it up by adding some cheese and tomato sandwiches.

Cheese sandwiches are our pick to serve with egg salad sandwiches because the flavor of cheddar isn’t too distinct. So whether you like mild or mature cheddar, it will still work with egg salad.

What is the best bread for egg salad sandwiches?

Most people prefer either medium-cut white bread or medium-cut wholemeal bread. These offer the softer textures that compliment the egg the most. Crispy white rolls also work well if you like the contrasting textures of soft and crunchy.