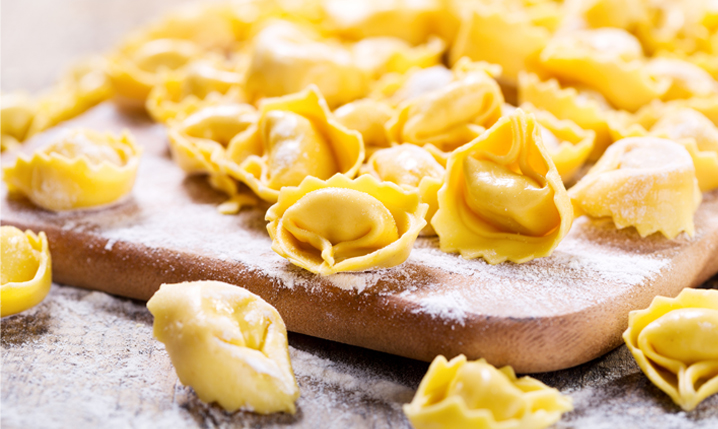 Fans of Italian Cooking, especially Pasta, will often tell you their frustrations about restaurants that don’t seem to know the difference between Tortellini and Tortelloni. In this article, we’ll explore the differences between the two.

Indeed, comparing these two delicious dishes often served in a broth or with a delightful tomato sauce has been a contentious subject for a long time.

Read on to find out everything you need to know about these two delicious pasta classics.

Tortellini is a ring-shaped pasta from the Emilia region in Italy. This stuffed pasta traditionally contains a mixture of meats, cheese, and spices. These ingredients include pork loin, prosciutto, and mortadella, while other components include parmesan cheese, nutmeg, and egg.

Traditional tortellini is then served in a capon broth. Each piece of this pasta weighs around 2 grams in total.

Tortelloni comes from the regions of Emilia and Lombardy in Northern Italy. Most often stuffed with cheese and vegetables such as ricotta cheese, porcini, spinach, walnuts, and other vegetables.

Traditional Tortelloni containing ricotta and various herbs will usually be stir-fried in melted butter, sage, and sometimes Ragu. Each parcel of Tortelloni is generally around 5 grams in weight.

The two are pretty simple to distinguish because of the size differences but should also be distinct due to the ingredients used and how the two are traditionally cooked and served.