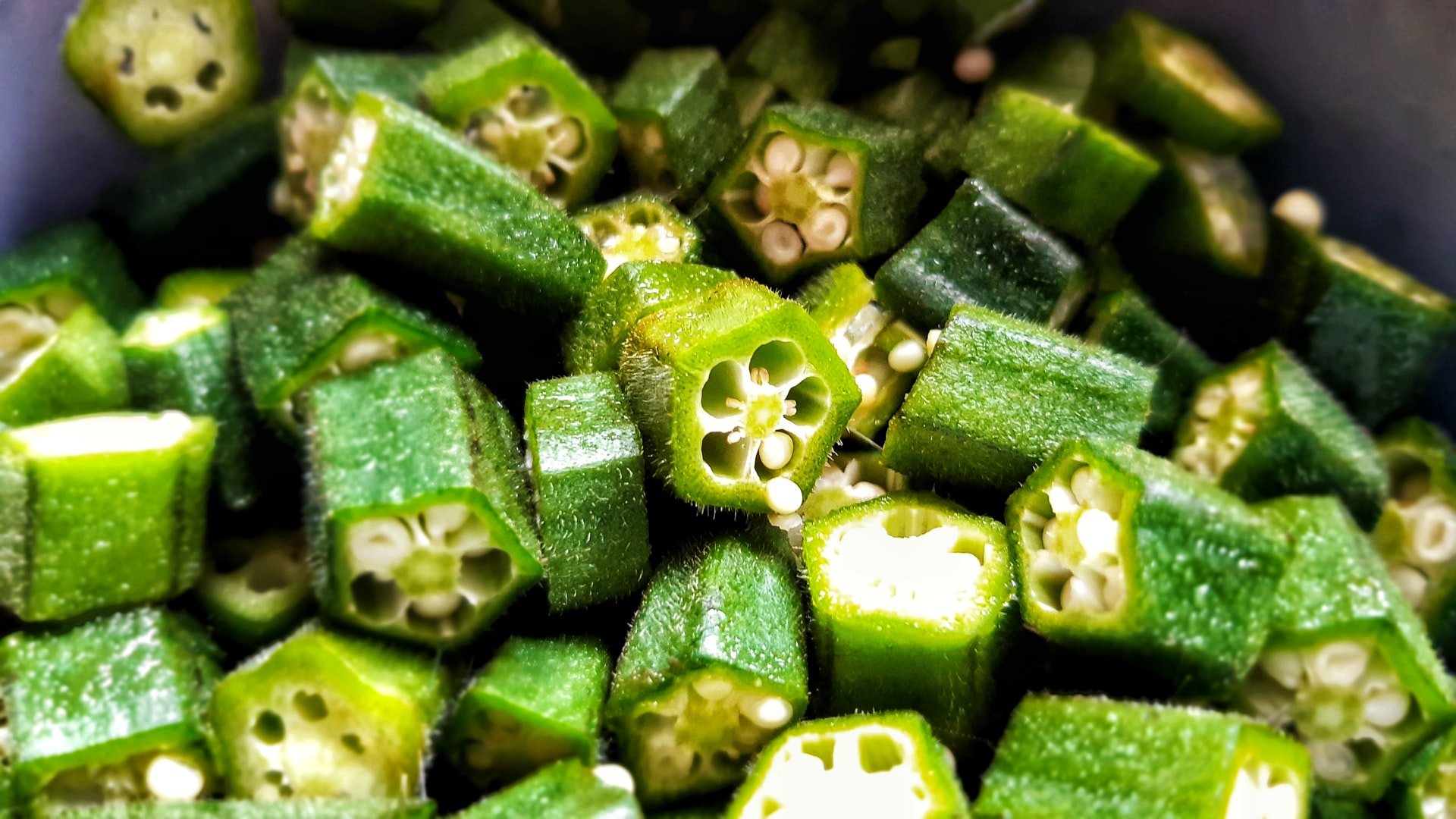 Okra is a type of flowering plant that produces edible seed pods. It’s commonly used in Southern cooking, particularly Louisiana Cajun and Creole cuisine, and has a slightly sticky texture. It’s a common ingredient in dishes like gumbo, stew, and soup and often takes on the role of a thickening agent.

Okra is both mild and slightly grassy. It’s firm and crunchy when cooked quickly but will become tender in slow-cooked recipes. However, it’s not a common ingredient and can be a challenge to find. That’s when you need a substitute.

So, if you’re looking for the best okra substitutes, look no further.

Cornstarch is a tasteless flour-like product derived from corn. And it’s commonly used as a thickening agent in sauces, gravies, and stews. Therefore, it makes for an excellent okra substitute when you’re looking to thicken something like gumbo.

Unlike okra, it’s not going to add the additional flavor to something like gumbo. So it’s not an exact replacement, but it’s going to be brilliant for thickening up your dish.

When using cornstarch as an okra substitute, you’ll want to mix it with water to create a thin paste. This will help to thicken your sauce or stew when added. Cornstarch is also a good choice if looking for a gluten-free okra substitute. Simply add cornstarch to your dish toward the end of cooking. And be sure to whisk it in well, so there are no lumps.

Another great okra substitute for those who need a thickener is file powder. It’s a type of seasoning made from ground sassafras leaves. And it’s commonly used in Cajun and Creole cooking making it an ideal substitute for okra. Like cornstarch, file powder is gluten-free and easy on the digestive system.

File powder has a mild flavor and can be used to thicken sauces, stews, soups, and more. As with most thickening agents, you’ll want to add it after cooking. This will help to prevent the file powder from clumping. But be careful not to add too much file powder as it can make your dish bitter. Start with a little and then add more to taste.

Perhaps you’re just looking for a similar vegetable to okra and don’t require its thickening properties. In that case, zucchini is your best bet. Zucchini is a type of squash that’s commonly used in Italian cooking. And while it doesn’t taste the same as okra, t has a mild sweet flavor. So, it won’t deter from the overall taste of your dish when used as an okra substitute.

While zucchini doesn’t have the same sticky texture as okra, it’s a good choice if you’re looking for a healthier alternative. But it’s important to note that zucchini cooks quickly, so it should be added later in the cooking process. This will prevent the zucchini from becoming mushy and your dish from becoming watery.

Derived from the arrowroot plant, arrowroot is commonly used as a thickening agent in sauces, gravies, and stews. And it makes for an excellent natural okra substitute if you’re looking to reduce the sauce in your dish.

When using arrowroot as an okra substitute, you’ll want to mix it with water to create a flavorless slurry. This will help to thicken your sauce or stew. Be sure to whisk it in well, so there are no lumps. Keep in mind that arrowroot can make your dish look cloudy. So, if you’d prefer a clear sauce or gravy, you may want to try another okra substitute.

One of the best substitutes for okra as a vegetable is asparagus. This vegetable is most often used in Italian and French cooking and can be cooked in many different ways. When eaten alone, asparagus has a specific flavor, but you’ll hardly notice it when incorporated into a dish.

This is the best okra substitute if you plan to coat it in a batter and fry it. But keep in mind that too much asparagus could make your dish slightly bitter. So, if you’re looking for a sweeter dish, use less asparagus or try another okra substitute.

Roux is a mixture of equal parts of flour and butter or lard. In fact, roux forms the base of most French and other creamy sauces. But it’s also commonly used as a thickening agent in sauces, gravies, and stews. And it makes for an excellent okra substitute when looking for a thickener. In fact, some gumbo recipes call for a roux. It’s not the only way to thicken gumbo, but it will add better flavor than something like cornstarch.

You won’t need to add much more than a tablespoon of roux to your dish to sufficiently thicken it. If you choose to use the butter and flour mixture, the butter should add a rich and creamy flavor to your dish. On the other hand, lard will inject a surprisingly healthier, more hearty, and fatty flavor profile.

The humble green bean is a superfood packed with nutritional value. And it’s a convenient okra substitute when needed. These nutrient-rich vegetables can be grilled, fried, roasted, boiled, sauteed, etc. They effortlessly enhance any dish they’re added to and provide a fresh crispness that can only be described as incredibly satisfying.

If your intention was to pickle your okra, green beans will make the perfect alternative. In fact, pickled green beans are a common accompaniment to many meals. And, while they are crunchier than okra, they’ll make for a fitting substitute.

What other vegetables does okra taste like? While it is well known that okra has a unique flavor, some think it tastes a little like green beans or eggplants.

So when you are looking for a vegetable replacement for okra then you can substitute eggplants or green beans as a suitable alternative.

Aubergine (eggplant) goes particularly well as an okra substitute for jambalaya, as do green beans and zucchini.

There are many options to use as a substitute for okra. However, the best substitute for okra will depend on the dish you’re making and your personal preferences. But, hopefully, this list has given you some ideas of substitutes to try the next time you’re in a pinch.