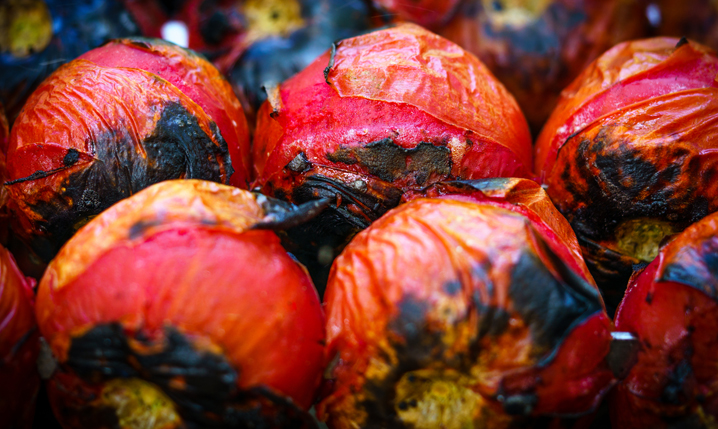 Fire-roasted tomatoes are delicious, smoky, and rich in flavor. They are used in numerous dishes and recipes, such as pizza or pasta. This dish-enhancing tomato can be used in dozens of recipes. So if you don’t have any on hand, what are some excellent substitutes for fire-roasted tomatoes?

Sun-dried tomatoes might be the best alternative for fire-roasted tomatoes, and not because they both have hyphens in the name. What both of these have in common is a unique and distinct flavor.

These tomatoes are baked in the sun to remove all moisture. They are then salted, drizzled with olive oil, and ready to eat. The result is a rich mouth-bursting flavor.

These can be easier to find in grocery stores and work well as a fire-roasted replacement in pizzas.

It might not be the same as roasting a tomato over a fire, but seared tomatoes are still a fantastic option that unlocks many similar flavors through the cooking process.

The high heat and browning of the tomato lock in the delicious flavors.

Pan-roasted tomatoes are a good substitute for fire-roasted tomatoes because they undergo a similar process of being cooked at a consistent heat that will cook evenly. This is also an easier option than searing tomatoes, but the result can be somewhat similar.

Using diced tomatoes over other options on this list is a good option when the flavor isn’t as important as the tomato itself. Some recipes taste perfectly fine without fire-roasted tomatoes and they have been recommended as a way to give the whole dish an extra dimension.

Salads are a good example of dishes where freshly-diced tomatoes can be used in place of fire-roasted and perhaps even taste better in some circumstances.

Because diced tomatoes haven’t undergone a cooking process, they do retain water, and this should be taken into account when using them as a substitute in other dishes or recipes.

Canned tomatoes are a good option, but making sure that the tomatoes are plum tomatoes can be an even better idea. They are most similar to fire-roasted tomatoes in texture – although they won’t have the same skin.

Used in place of fire-roasted tomatoes when creating pasta dishes, this can be a good alternative, especially if you remove excess sauce and cut the tomatoes into halves.

No matter the requirement, there are so many brilliant substitutes for fire-roasted tomatoes. There are quick and easy options and even an ideal replacement such as sun-dried. Give them a go and enjoy your cooking!