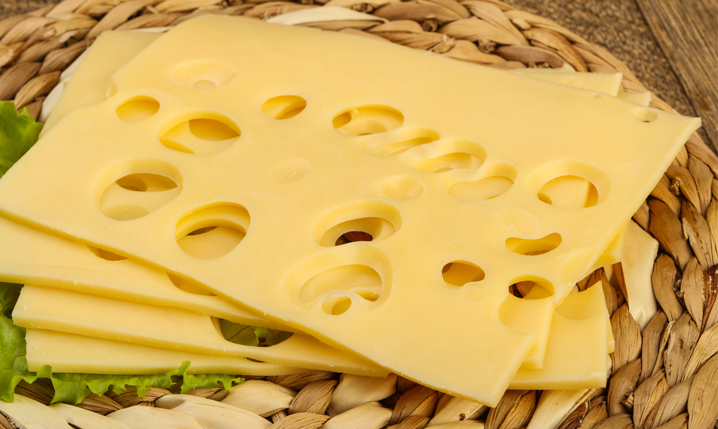 When it comes to cheese, there are few as immediately distinctive to the eye as Emmental. It is also pretty tasty too, used as a melting cheese all over the world for this exact reason. If you’re looking for an emmental substitute, read on to find out some options.

Emmental Cheese is a Swiss cheese that is famous for having visible round holes all over the surface. Both are high in calcium and fat. Emmental is most often sold over the counter and is made from pasteurized milk. However, traditional Emmental is made from unpasteurized.

Read on to find out some of the best substitution options for emmental cheese. There are several ideal alternatives for any situation.

Gruyere is a smooth cheese from Switzerland that is known for it’s mouth-watering melting properties. It’s a great cheese for enjoying alone, or melted over toast, or in a sandwich. It makes a great substitute for fondues and similar uses.

You might know that Gruyere is used in grilled cheese sandwiches in France. This is called Croque Monsieur, so it makes a perfect substitute cheese for Emmental when it comes to anything involving bread.

Fontina is a sweet and nutty cheese with a creamy taste. The rich flavor is buttery in the mouth and like Emmental the cheese has small holes giving it that distinctive appearance.

This cheese is a semi-hard cheese with a smooth body that makes it ideal for melting into cheese sauces, grating over portions of pasta or soups, and can even be used on pizzas.

French Comte is a distinctive cheese with flavors of roasted hazelnuts and creamy butter. You can use this as a substitute for Emmental in almost any dish you’d like, but be aware that it is very rich.

You should start out by using less Comte than you would Emmental, because of the richness of this cheese.

One of the best things you can do with any substitute is taste-test as you go, so you should do that with this cheese when making sauces or using it for melting.

It is a mild cheese with Scandinavian origins that is known for being semi-soft, it is almost spongey when you cut it. The other similarity is that they are visually almost identical, but while mild, it is a stronger tasting cheese than Emmental. Some people actually prefer it in any dish or recipe for that reason.

It is a great melting cheese that works well in any recipe from grilled cheese, pizza, toast, or fondue.

Gouda cheese is another mild cheese with slightly nutty flavors, making it similar to Fontina. It’s not necessarily as good of a substitute though.

The main drawback with Gouda isn’t the flavor or its strength. It is a sweet, creamy cheese that originates from the Netherlands, but it doesn’t melt as well. This is because there are many types of Goudas. Some are semi-hard, others are softer like Jarlsberg.

So Gouda is a good option, but the great variety of them means you need to pay attention to what you’re buying and really make sure it fits as many of the Emmental characteristics as possible if you’re looking for a 1:1 replacement.

You should pick a milder cheddar cheese when you want to use it as a replacement for Emmental. There are other options, such as medium, mature, or extra-mature, but seeing that Emmental is a mild cheese it can be better to stick with mild cheddar.

You can use cheddar as an emmental substitute in poutines, salads, or for melting over meat such as chicken.

If you need a quick substitute for emmental cheese then one of these cheeses will work well in any situation, recipe, or dish. Give one of them a go and you’ll be pleasantly surprised with how tasty the result will be!