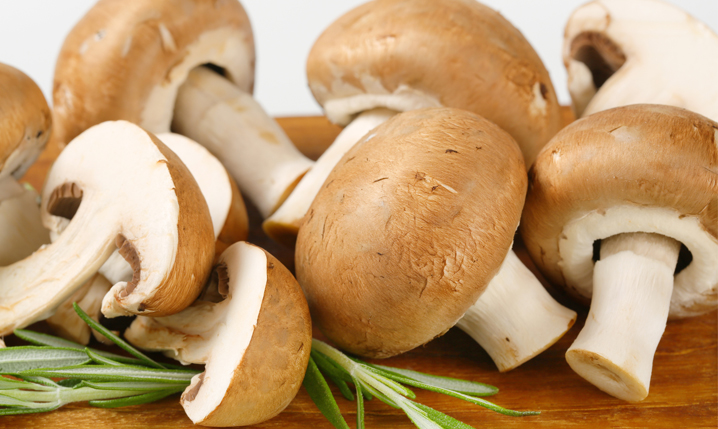 Cremini Mushrooms are one of the most common mushroom varieties that you can find in the supermarket. People love their rich, earthy flavor and firm texture, which goes well in pasta sauces, risottos, and many other meals.

Cremini Mushrooms are delicious, but sometimes you can’t find them in the supermarket. In those situations, here are a few substitutions for these popular fungi.

These mushrooms are easier to find in the supermarket and less expensive than the cremini variety so you shouldn’t have a problem finding these in the store.

White Button Mushrooms have a milder, more neutral flavor than Cremini Mushrooms, which is a benefit if you are cooking for a picky eater who hates mushrooms, but you will miss out on some flavor. They have a floppier texture, so they do not always work as well in dishes with a lot of liquid such as soups and stews.

Portobello Mushrooms also work as a substitute for Cremini Mushrooms because they are the same variety of mushroom, just slightly more aged. Portobello Mushrooms have large brown caps and an aged, almost smokey flavor. They are a popular choice for vegan burgers thanks to their meaty texture.

Portobellos have a similar flavor profile to what you’d get with a cremini, although their flavor is more intense (this can be a benefit or a drawback, depending on your opinion of mushrooms in general). They are also much larger, so you may need to spend more time cutting them down to size.

Shiitake Mushrooms are the most popular mushroom variety in East Asia. They come in dried and fresh varieties, although the fresh kind are much more nutritious and makes for a better Cremini Mushroom substitute.

They work well as a substitute for Cremini Mushrooms because they have a similar woodsy, almost smokey flavor.

Shiitake Mushrooms can replace Cremini Mushrooms in rice dishes, sauces, and stews. However, they have a chewier texture that some people find off-putting, particularly those who do not like mushrooms.

Oyster Mushrooms are easily recognizable in the store thanks to their distinctive branching shape. They also have a distinctive stringy texture, which makes them a popular vegetarian replacement for pulled pork.

Oyster Mushrooms have a similar earthy flavor to creminis, making them a good substitute for sauces or side dishes. They are slightly sweeter, but that can only enhance the flavor of some dishes. The biggest drawback of this substitution is the texture, as Oyster Mushrooms are floppier than Cremini Mushrooms.

Eggplant, a purple, oval vegetable that is a member of the nightshade family, seems like a strange substitute for Cremini Mushrooms. However, it has a similar meaty texture that allows it to function as a meat replacement, just like Cremini Mushrooms.

The earthy flavors are also similar, although eggplant is slightly more bitter.

If you are preparing a dish for someone who does not like mushrooms, then eggplant can replace Cremini Mushrooms in risotto, stews, and pasta sauces. However, eggplant is more bitter than mushrooms so you may have to salt it beforehand to draw out some of the bitterness. It is a pretty drastic change in flavor and texture for your recipe, so be prepared for that.

To make this substitution work properly, you will need to combine dried tomatoes with herbs such as rosemary and basil. This substitution does not work in recipes where Cremini Mushrooms are one of the main ingredients, such as risotto.

If you find yourself looking for a cremini mushroom substitute there are plenty of suitable alternatives. Whether it’s the white button or the versatile portobello, something on this list will work in your recipe as a 1:1 replacement. Other options might introduce a little difference, but they’ll still taste amazing.