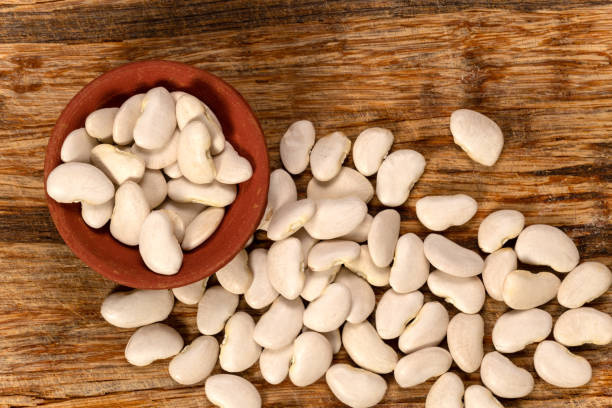 Butter beans are common in various savory recipes, like casseroles and salads, thanks to their nutty flavor and silky texture. Their versatility and high nutritional value make them an excellent choice for a healthy diet.

Peruvian natives refer to them as Lima beans after Peru’s capital city. Burma bean, Madagascar bean, Rangoon bean, and Chad bean are just a few other names they go by. You can toss them into soups, purée them for dipping sauces, or serve them raw as a simple salad.

You might be disappointed when you can’t get these beans to use in that recipe; don’t be; there are other options.

Here are the best substitutes for butter beans to use in your dishes.

These legumes are the closest substitutes for butter beans that you can get. You won’t be able to tell the difference between fava and butter beans if you exchange them in dishes. They are initially from Asia Minor and the Mediterranean, where they are also popular ingredients.

Fava beans are as creamy as butter beans, so they can be used in recipes that call for them. On the other hand, Fava beans have skins that must be removed before they may be used as a replacement. They’re not just delicious, but they also have numerous health benefits, such as lowering blood pressure and assisting weight loss.

These large white beans are one of the most fantastic butter beans substitutes you can think of. Though they’re a staple of Italian cooking, they first originated in Southern Argentina before becoming popular cooking additions. Haricot Blancs, Fagioli, and White Kidney Beans are just a few of the names people call them.

Cannellini has a nutty flavor and a creamy texture that goes well with various meals, making them a versatile ingredient. With their slightly thicker skin than other white beans, they can better maintain their shape when cooked. Since both have a similar texture and taste to butter beans, they’re better in stews, soups, and salad.

When you seek one of the most common butter beans substitutes, your best option is pinto beans. For thousands of years, Mexican and Peruvian farmers have grown pinto beans, which are today primarily consumed in the United States. Refried beans, burritos, and chili are typical recipes where you can add these beans.

Pinto beans, which are named after the Spanish word for “painted,” have a distinctive brown speckled hue when dried. As the beans are cooked, these patterns vanish, turning a rich brown color. Although they have a distinct powdered texture, you can use them in recipes that call for butter beans.

Other names for these red and white speckled beans are cranberry beans, Romano beans, and Saluggia beans. These Colombian-born beans, related to kidney and pinto beans, are now far more regularly farmed in Italy. It’s a common ingredient in Italy, Portugal, Turkey, and Greece dishes.

They have a moderate nutty flavor but with more sweetness than you’ll find in other white beans. Borlotti beans are a nutrient powerhouse, containing high amounts of fiber, folate, and other B vitamins, including iron, zinc, and potassium. Cancer-fighting plant compounds that reduce the chances of getting cancer are also part of its components.

Despite their unique red appearance, these beans are great substitutes for butter beans. These options were native to Peru before they became widespread. With a cooking history that dates back to over 800 decades, they have been used to prepare different cuisines.

Butter beans and kidney beans are similar in appearance and texture, with the former having a somewhat sweeter flavor. In raw kidney beans, the lectin content is higher, making them more harmful than other bean types if processed incorrectly. You should soak dried kidney beans for a while and boil them on high heat for 10 minutes.

Since the mid-1800s, these excellent substitutes for butter beans have been a staple in American cuisine. In the US Navy, they became a common ingredient due to their inexpensive cost, long shelf life, and nutritional value. As a result, they gained the nickname navy beans, but they are also known as Boston bean, Yankee bean, and pea bean.

The mild flavor and smooth texture of navy beans make them ideal for cooking, but they break down quickly. Soups can benefit from their thickening properties, but they will lose their form in salads if you use them. Aside from this, you get several healthy nutrients, including folate, iron, zinc, magnesium, and calcium.

You can prepare different recipes using these butter beans substitutes, including pancakes and fitters. In contrast to the other beans in this list, garbanzo beans came to Europe and India from the Middle East. These beans, often known as chickpeas, are a crucial ingredient in various Middle Eastern and North African recipes.

With this list, you no longer have to worry when you can’t get any butter beans for your recipe. Choosing butter beans substitutes is relatively easy as many share the silky texture as their counterpart. However, if you want something closest to its flavor, you might want to try fava beans.

Another reason these substitutes are outstanding is because of their added nutritional value. Many of these are high in fiber and contain other elements the body needs.